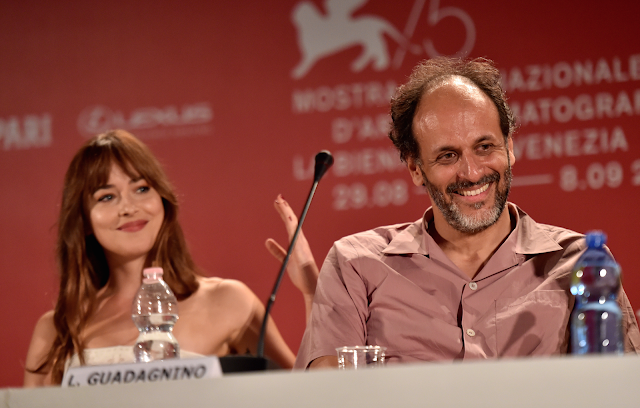 Dakota Johnson suffered an awkward moment on the red carpet when director Luca Guadagnino allegedly had to stop her from suffering an embarrassment.
The unfortunate moment was captured on camera, where the director appeared to touch the actress’ breast as he attempted to hide the top of her dress.
The actress seemed shocked at the photocall for Suspiria at the Venice Film Festival, as onlookers told The Sun it looked like he was trying to shield her from the cameras, apparently having suffered a wardrobe malfunction, rather than having touched her chest as the camera angle made it appear.
The camera angle may have made his hand appear closer to her body than it was.
She was seen after giggling and leaning on his shoulder as if grateful for his intervention.
The film debuted at the festival, with it reportedly receiving mixed reviews.
Dakota previously admitted she’d needed therapy following work on the project, a dark horror/thriller focusing on the strange disappearance of dancers from an exclusive academy.
‘I find sometimes when I work on a project and – I don’t have any shame in this – I’m a very porous person and I absorb a lot of people’s feelings,’ she told Entertainment Weekly. ‘When you’re working sometimes with the dark subject matter, it can stay with you, and then to talk to somebody really nice about it afterward is a really nice way to move on from the project. My therapist is a really nice woman.
The film, due out in November, sees Dakota’s character Susie enroll in the dance academy in Berlin, but slowly realizes that one by one dancer keeps disappearing in strange and horrific circumstances.
She is drawn into a cult of modern witches as her fellow dancers start to disappear. It also stars Chloe Moretz, Tilda Swinton, and Jessica Harper.
Next Post
Celebrities Gossip