A very Posh arrival! David and Victoria Beckham attend post-wedding brunch in a $500k Jaguar after their son Brooklyn and Nicola Peltz's $3.5m Florida nuptials... as kids Romeo, 19, Cruz, 17, and Harper, 10, greet them at lavish estate

David Beckham and his wife Victoria headed into Palm Beach for a lavish Sunday brunch in a $500k classic convertible Jaguar after their son Brooklyn and Nicola Peltz's $3.5m Florida wedding the previous day. The fashion designer, 47, wore a black strapped top while framing her face with an oversized pair of sunglasses while her former footballer partner, 46, looked dapper in a relaxed white shirt.
Standing by the gates of the spectacular Peltz family estate to welcome them in were the couple's children Romeo, 19, Cruz, 17, and Harper, 10.
David and Victoria arrived in style in a 1954 Jaguar XK140, an electric motor modified by Lunaz, a company in which David holds a 10 percent stake. 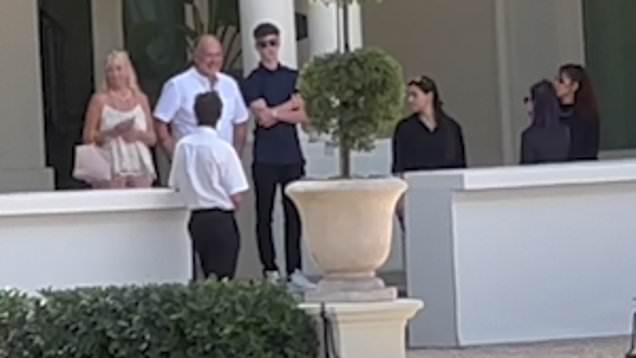 Newlyweds Brooklyn and Nicola were pictured in the same vehicle for the first time since they got hitched - with the aspiring chef, 23, wearing a relaxed cream sweater while his wife, 27, tied her blonde locks into a ponytail with a white ribbon.
Romeo stood out from the crowd in unmissable pink trousers and a white top while Cruz sported an oversized blue sweater and Harper a trendy brown dress.

Hours prior, Cruz couldn't help but let out a gigantic yawn on the morning after brother Brooklyn's flashy Palm Beach nuptials.
The teenager gave a helping hand as he carried a cardboard box along with a heavy-looking bag while chatting with a pal after a long night of celebrations.
Next Post Previous Post
Celebrities Gossip