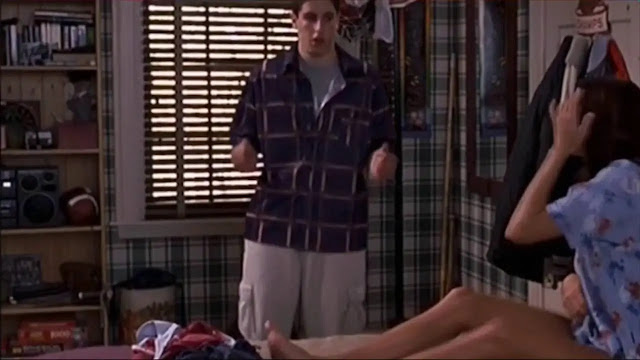 Jim Finally convinces his crush Nadia to study with him at his home and he even sets up a camera in his room so that he can watch her record the study session and also watch her change into new clothes (Stalker Alert!). But while she is changing, she just happens to come across Jim’s porn and to everyone’s surprise, she starts masturbating in Jim’s room. Being the early days of email and the internet, somehow the whole school gets access to Jim’s webcam and everyone is now watching this live. He rushes back to his room to get a glimpse of Nadia but it leads to a lot of embarrassment where Jim is asked to strip and in the process, when he finally gets a chance to sleep with Nadia, he prematurely ejaculates. He does this not just once but twice, and ends up being the laughing stock of the entire school.
Times surely have changed now and what was considered to be sexy and funny back then would raise a lot of debate today. A scene like this would be perceived as a sexist crime in the present world which is also fair enough. But then, this is just a movie and there’s a reason why some of these scenes are just evergreen because they were acceptable in a way back then and cannot be repeated in the present times.

Super Glue Should Be Banned 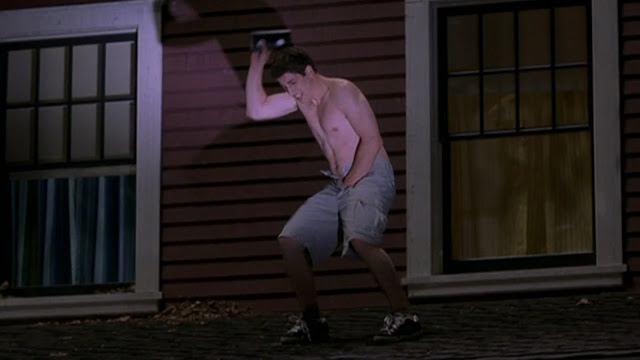 The boys have all grown up and they decide to get together for a summer reunion. They rent a grand house by the lake and are determined to make this summer break the best one yet. Everything seems to be going fine apart from a few awkward Stiffler moments that are usually inevitable. However, their summer break soon takes a wicked turn when Jim decides to have some private time off all for himself. He shuts his door and starts watching one of the porn DVDs Stiffler had given him earlier. But instead of using a lubricant, he accidentally ends up using super glue, the worst mistake ever. And to make things worse, with one hand stuck down there and the other one to a porn DVD he even manages to call the cops while he is stranded on the roof of his house.
What makes the ending of this scene epic is when the cop asks Jim to put both of his hands in the air when one of them is actually stuck down there. Jim somehow manages to attract trouble all the time when it comes to sex, but in this scene, things just went way too far and it is too damn painful to watch someone have their hand stuck down to the groin. 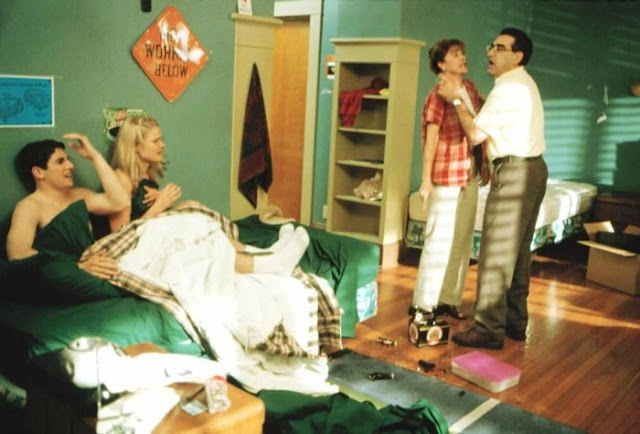 Almost all American Pie movies start off on the same note: an embarrassing sexual escapade for Jim. Jim seems to have come really far from his disastrous encounters of the first film. In this scene, he hooks up with a random girl from his college like everyone else and that’s when his Dad walks right in. Jim asks him to leave them alone, but poor Mr. Levenstein, in an attempt to make things less awkward, tries to explain it to them that “it’s human nature at its best.” Finally, when he is about to leave after making the situation worse, Jim’s mom walks in and starts panicking. What happens next is a little far-fetched, but well it does happen. The girl’s parents walk right in and Jim’s dad offers them beer. Real subtle move there, Mr. Levenstein!
Next Post Previous Post
Celebrities Gossip,Movie Review