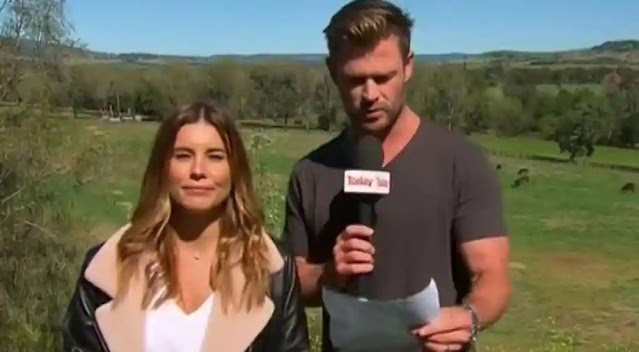 Australian news channel 9Now had an unusual weatherman during one of its weekend episodes. Hollywood star Chris Hemsworth hilariously crashed in a live weather report and chose to read out the weather for Weekend Today on 9Now. The clip of Hemsworth reading the news has since then gone viral.
The video has Australian TV host Lauren Philips opening the weather report but soon the ‘Thor’actor takes over and tells viewers about sun and rain across Australia. The episode aired last Friday.
Watch the clip here.

We get some help with weekend weather from the God of Thunder himself, Chris Hemsworth! #9Today pic.twitter.com/YsfCxADIiD

On Instagram Philips revealed that Hemsworth was keen to read the weather report and gain ‘work experience’ with her.
She delivered the weather report from Scone, which is apparently the horse capital of Australia. She wanted to include horses in her weather report and they can be seen in the background, but instead, she got Hemsworth—and well, no one was complaining.
Turns out the actor was in the area to visit organizations that do conservation work. Hemsworth said he’s a little like a rogue horse, so it all worked out fine.
While everyone was surprised to find Hemsworth reading the weather report, the expressions on 9Now studio anchors were priceless.
Richard Wilkins and Rebecca Maddern weren’t expecting to see the actor either. Maddern’s jaw literally dropped while Wilkins laughed nervously.
Hemsworth pretended to be a horse at one point of time, and then with complete nonchalance read out the weather report. Guess, if ever the actor decides to switch professions, he has this as an option now.
Next Post Previous Post
Celebrities Gossip