Christina Haack, 38, and her fiancé Josh Hall are fueling speculation that they've secretly tied the knot during a PDA-packed beach vacation at the Montage in Cabo San Lucas. The HGTV star cuddled up with Hall while enjoying a sun-soaked day in Mexico over the weekend and was spotted wearing what appeared to be a wedding band next to her engagement ring. Adding to the mystery, new photos reveal that Hall is now sporting a brand new tattoo of an infinity symbol on his ring finger.

The accessories seem to suggest that the couple may have made things secretly official. Plus, on Sunday, Christina shared a loved-up image with Josh on Instagram and dismissed haters in the caption who've suggested she's moving 'too fast, too soon.'

Christina had no shame in her love game while on holiday and cozied up to her fiance (or possible husband). The pair held hands and walked along the shoreline with Josh sporting a pair of blue swim trunks. 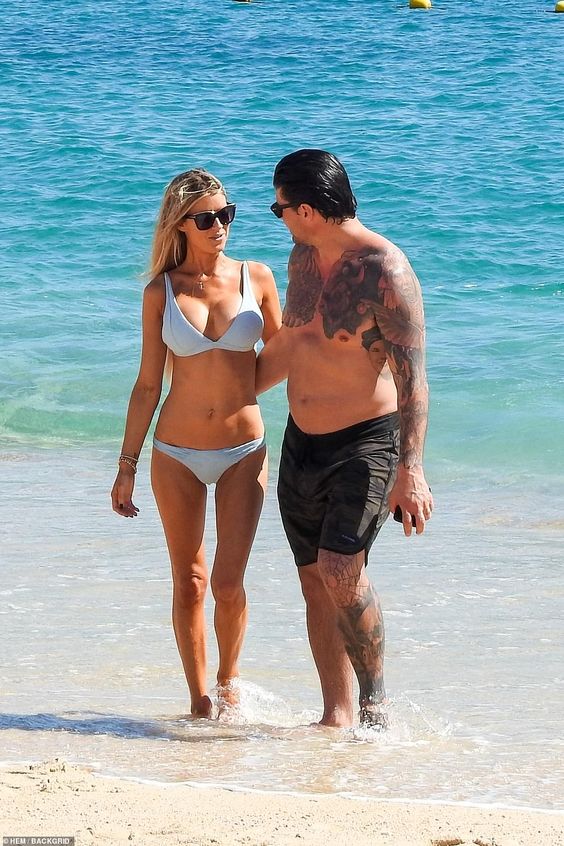 His chest and arm tattoos were on display, as was a very small but very noticeable addition of an infinity symbol on his left ring finger.

The ink is a new addition and wasn't there during the couple's last beach trip back in September.

Hall, who also works in real estate, took to Instagram Monday with a romantic post about his lady love.

'True love is rare, so go for it,' he wrote in a caption. 'Fear controls you, so face it. Time is precious, so indulge it.'

'Life begins at the end of your comfort zone. Never settle for less than you deserve. We only get one life, so don't waste a moment of it.'

Along with the affectionate post, Josh added a loving photo of him and Christina kissing in front of a picturesque beachy backdrop.

In the caption, she penned: 'Too fast, too soon, too blah blah blah.. that feeling of pure bliss / those deep convos, love is what it is.'

While seemingly shutting down haters with the caption, Haack later deleted the words and replaced the caption with a handful of emojis.

The Christina on the Coast star has been documenting her 'weekend getaway' to Mexico for her 1.7 million followers.

Before she and Josh headed back to California on Sunday, they spent the day enjoying a fun game of cornhole on the beach and drinking champagne.

'Rapidfire ringer Christina Haack,' the real estate worker wrote across the bottom of a video showing his ladylove showcasing her cornhole skills.

Haack announced the kickoff of their 'weekend getaway' on Friday by posing arm-in-arm with Hall in front of the gorgeous blue ocean.

'1.14.22 building life together and enjoying some alone time. Love you, Josh,' she wrote in the caption, along with a red heart emoji.

For this photo, Haack sat on her man's lap in a revealing white bikini, while her beau firmly wrapped his hands around her hips, as he leaned back on the stone ledge in gray shorts and flip-flops.