She's been consumed with racy alter-ego Anastasia Steele for months during filming for the sequel to Fifty Shades Of Grey.

But when Dakota Johnson finished Fifty Shades Darker on Thursday, she seemed to be having trouble shaking off the persona, posting an extremely suggestive photo to Instagram.

With bedhead hair and no make-up, Melanie Griffith and Don Johnson's daughter naturally prompted quite a reaction from her 1.1m followers.

Despite going topless for some of her racier beach scenes, Dakota was distinctly more covered up as she headed to the airport on Thursday to leave Europe for Los Angeles.

The actress, who reprises her role one year after the original film hit screens, has completed shooting all of the remaining films in the series.

Making a sophisticated outfit change, Dakota arrived at LAX wearing a button-up blue blouse, which she paired with her collared top with a set of dark skinny jeans.

The actress added a bit of menswear flair with penny loafer style dress shoes and a long blazer over the top of her outfit. 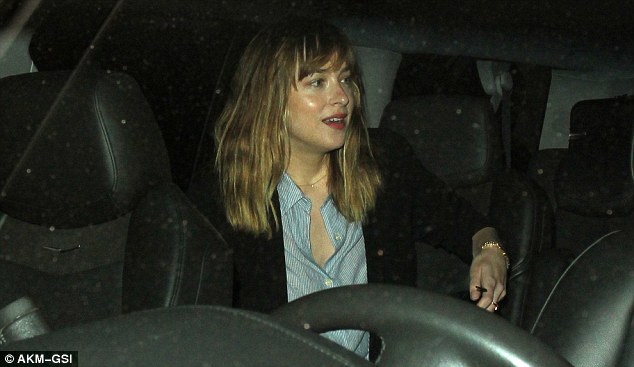 The actress did not appear tired from her hours-long flight or her busy schedule of filming that's been keeping her occupied.

Filming was briefly interrupted by the tragic Nice shooting last week, but all cast and crew were reported safe, shortly after the incident.

They took a brief break, returning to set a couple of days afterward, allowing them a little respite from the acting commitments.

The duo has now wrapped filming of the entire franchise, with the remaining two movies set for 2017 and 2018 release dates.

'Fifty Shades is wrapped. Thanks to all the fans who came to support us,' wrote the book's author, E. L. James, on Twitter.