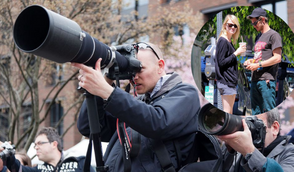 Being famous is not an easy job: a large group looks up to you and all eyes are on you—always.

A simple mistake can ruin your whole reputation and assumptions are constantly made. Drama is always in the air and ready to be recorded by paparazzi.

Celebrities are thrown into a big bubble with crazed fans and relentless paparazzi. Paparazzi annoyingly take pictures of everything, and obsessive fans are everywhere. It’s a wild life.

While it is a result of their success and fame, do celebrities always like the constant attention? No because celebrities also have their moments of anxiety, depression, overwhelmedness and fear. Famous people are humans, they have the same feelings anyone may suffer from. It is harder for celebrities to deal with their “moments” however since they aren’t always private.

The sole job of a paparazzi is to capture celebrities and any of their moments or activities that are “interesting.” Thus, they seek to spark drama to create a story which they can photograph or record for. And even if there is no drama surrounding a celebrity, paparazzi will stalk the celebrity to take photos of them getting groceries, going to the gym or walking a dog. Wherever celebrities go, paparazzi follow.

While the flashing lights and yells of questions are beyond annoying, paparazzi often go beyond annoying and become invasive and even dangerous. Chris Brown, Justin Bieber and Selena Gomez have blamed some of their car crashes on paparazzi. Miley Cyrus yelled at a man for running into her mom with a camera trying to take a picture of her.

There have been incidents of celebrities such as Kanye West, Emma Stone, Jack Black and many more celebrities who have gotten very annoyed by paparazzi and took action. Sometimes celebrities will go cuss them out, make funny faces, flip them off or push them away.

Being famous certainly has its advantages though. Luxury cars, mansions, expensive jewelry, customized shoes, expensive clothes and almost anything they want. Some celebrities use their money for important causes like donations made to multiple charitable organizations and hospitals. Paparazzi can spend heavily on themselves and still have thousands of dollars to give away.

Despite donating $50,000 to The Children’s Hospital of Philadelphia in 2014, paparazzi have sought to start drama around Taylor Swift and relentlessly chase her. While not confirmed true, Taylor Swift reportedly travelled inside a suitcase last September to avoid paparazzi. The extent of the measures celebrities will use to avoid paparazzi shows how annoying paparazzi really are.

While it’s perfectly legal for paparazzi to take pictures of celebrities in public places, it doesn’t mean they should do it. Being famous comes with lots of disadvantages and advantages, and unfairly, that’s what you risk when you put yourself out there.