A young New York native named Peter Falk was restless, bouncing around colleges, unsure what to do with himself in a post–World War II America. During the 1950s his restlessness and thirst for a thrill piqued an interest in acting, which spurred the fateful decision to join a community theatre group. 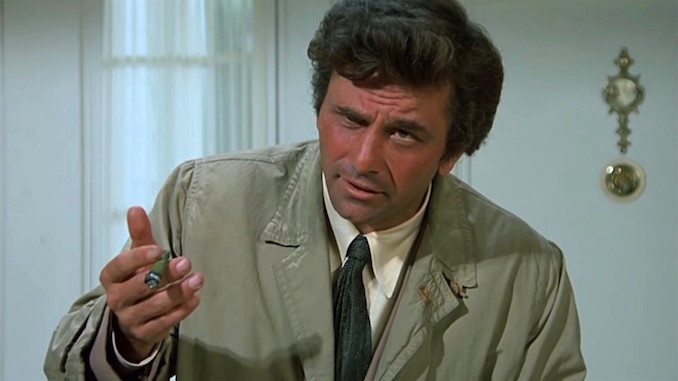 The aimless twenty-something would go on to become one of Hollywood's most versatile actors, an Emmy-winning and Oscar-nominated talent who could portray vicious thugs in noir films as well as likable characters in comedy and drama.

But regardless of his prolific work in television and film, Peter Falk will forever be synonymous with the lovable detective Columbo, a cigar-chomping man in a tattered raincoat who hides his brilliance behind a shabby, scatterbrained facade.

From Broadway to the silver and small screens, here are 16 fascinating facts about Peter Falk and Columbo.

He was the first actor nominated for an Oscar and Emmy the same year.

In 1961, Falk earned the distinction of becoming the first actor to be nominated for an Oscar and an Emmy in the same year. He received nominations for his supporting roles in Murder, Inc. and television program The Law and Mr. Jones. Incredibly, Falk repeated this double nomination in 1962, being nominated again for a supporting actor role in Pocketful of Miracles and best actor in "The Price of Tomatoes," an episode of The Dick Powell Theatre, for which he took

He played villains for Rod Serling and Alfred Hitchcock.

Falk portrayed a variety of unsavory characters on television during the early 1960s. In The Twilight Zone episode "The Mirror," Falk stars as a paranoid Castro-esque revolutionary who begins seeing would-be assassins in a mirror. In Hitchcock's series, Alfred Hitchcock Presents and The Alfred Hitchcock Hour, Falk first stars as a gangster and then a murderous evangelical.

He wasn't the first actor to play Columbo.

Though the character Columbo first appeared on television in 1960, it would be nearly a decade before Falk would become synonymous with the rumpled detective. First, Bert Freed played the LAPD flatfoot in a 1960 episode of anthology series The Chevy Mystery Show. A couple years later, Thomas Mitchell (pictured to the left) played the sleuth onstage in a production called  Prescription: Murder in San Francisco. When it was decided that the play would be turned into a television movie in 1968, the lead was offered to Lee J. Cobb and Bing Crosby, but Falk landed the part.