Though some only know Emily Ratajkowski on a surface level, from her semi-nude turn in the "Blurred Lines" music video or the lingerie-clad photos she posts to Instagram, the 25-year-old model and actress have a greater mission in mind.

Ratajkowski is a woman with a goal: to rewrite the national dialogue and change the way we see female sexuality. "The implication is that to be sexual is to be trashy because being sexy means playing into men's desires," she wrote for Lena Dunham's Lenny Letter in February 2016, "To me, 'sexy' is a kind of beauty, a kind of self-expression, one that is to be celebrated, one that is wonderfully female. Why does the implication have to be that sex is a thing men get to take from women and women give up?"

The first step in upending the societal norm? Speaking out. Ratajkowski is not one to let her detractors have the last word. She's committed to clapping back at the haters, and that she has. Here are the most incredible moments that InStyle's March cover girl had body shamers shaking in their boots.

EmRata came under fire last fall when Tim Gunn commented on the plunging Julien Macdonald gown she wore to Harper's Bazaar's Icons party. "This dress is so appallingly vulgar and revealing," the Project Runway mentor quipped, "Why wear anything? Why not just take it all off?" Well, the body-positive star was not having it. Ratajkowski addressed Gunn's disparaging comments in a series of tweets, writing, "When I wrote my Glamour article, I was just thinking of men who call women attention seeking for being sexy.

I wasn't even thinking of the hosts of nationally televised shows who call women vulgar because they can see their stomachs. Western men in 2016: Want to ban women abroad from voluntarily covering themselves at the beach . . . then want women to cover up their 'vulgar' bodies at home. It's 2016. Why keep trying to dictate what women can wear?" SHUT. DOWN. In the September essay she wrote for Glamour, Ratajkowski detailed the sexist backlash she faced for simply voicing her political opinion: "In February, during a snowstorm in New Hampshire, I had the honor of speaking at a Bernie Sanders rally. Having been politically minded throughout my life, I felt it only natural to support the candidate I believed in. The Internet, however, felt otherwise. After posting a picture of myself at the rally and a video of my speech about Bernie's positions on equal pay, maternity leave, and economic inequality, I was trolled heavily. Commenters said I had 'an excess of beauty and lack of brain" and told me to 'shut up and show us your tits.' But I was also criticized in a very specific way— for seeking attention. They wrote me off as 'a desperate attention whore,' saying I was taking part in the conversation only because everybody else was too."

I realized then that I've been called an attention whore so often that I had almost gotten used to it. And as women, we are accused of seeking attention more than men are, whether for speaking out politically, as I did, for dressing a certain way, or for even posting a selfie. Our culture has a double standard that runs so deep, many women have actually built up an automatic defense—attempting to be a step ahead of potential critics by making sure we have 'real' reasons for anything we say or do."

EmRata and Kim Kardashian West shrug off the haters 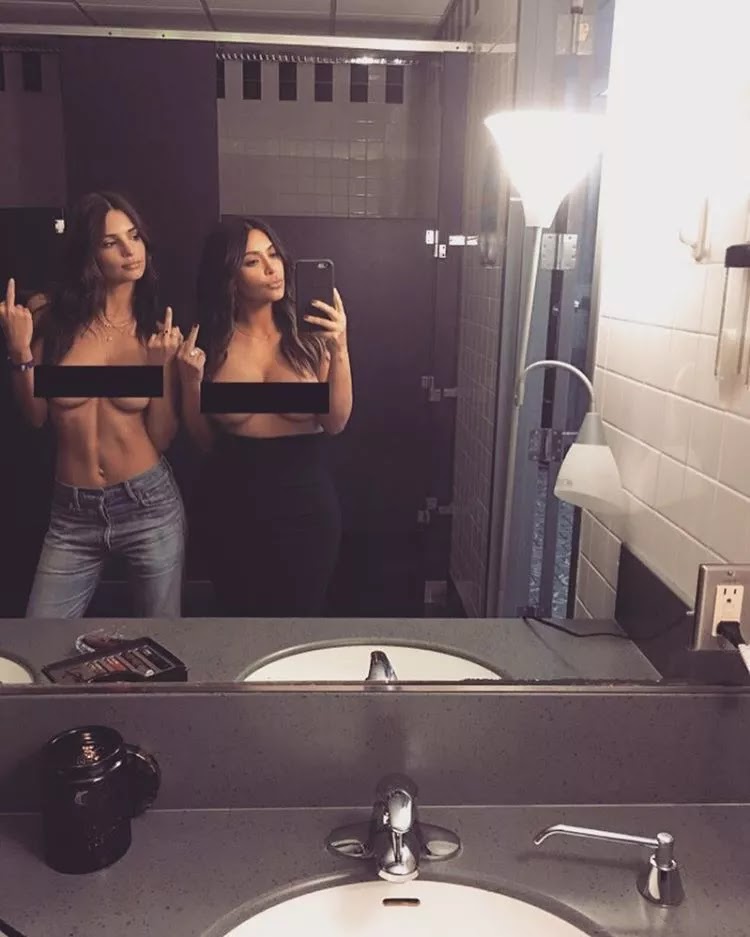 "We are more than just our bodies, but that doesn't mean we have to be shamed for them or our sexuality," Ratajkowski captioned her viral nude selfie with KKW.