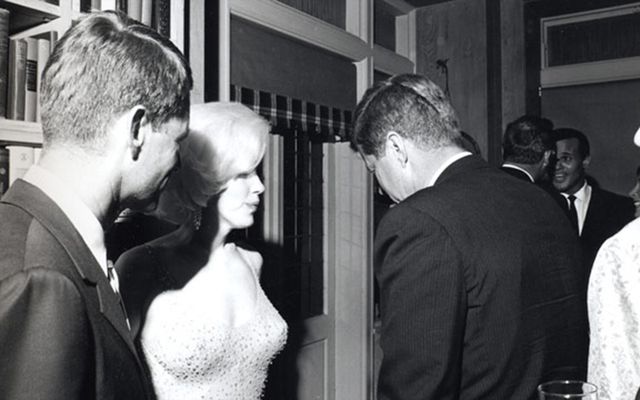 John F. Kennedy was no stranger to allegations and rumors over his infidelity and extra-marital affairs but it was Marilyn Monroe, by far, who held the public's attention as one of the President's possible mistresses.

Once media outlets started to couple JFK and Marilyn Monroe as having a secret love affair, audiences across the world latched onto the very notion and any picture or event with the two of them would be sprawled across magazines and newspapers with speculations.

One of the first points at which the rumored couple began to gain attention was when Monroe sang “Happy Birthday” to the president in a now-infamous seductive manner on May 19, 1962.

Yet is there any truth to the rumor that John F. Kennedy and Marilyn Monroe had an affair? We take a look at their relationship and what evidence has emerged to decide true or false.

How did Marilyn Monroe and John F. Kennedy meet?

It had been speculated that the pair met at a dinner party held in JFK's honor in New York at the beginning of 1962, and were introduced by none other than Frank Sinatra, a close friend of JFK's.

Kennedy is then said to have invited Monroe to a weekend at Bing Crosby's house in Palm Springs the following month, where they were not joined by his wife Jackie.

Monroe was named as one of Kennedy's mistresses by investigative reporter Seymour Hersh in his book “The Dark Side of Camelot”, yet many of the others who claimed that they knew she was JFK's mistress have since admitted they were lying. 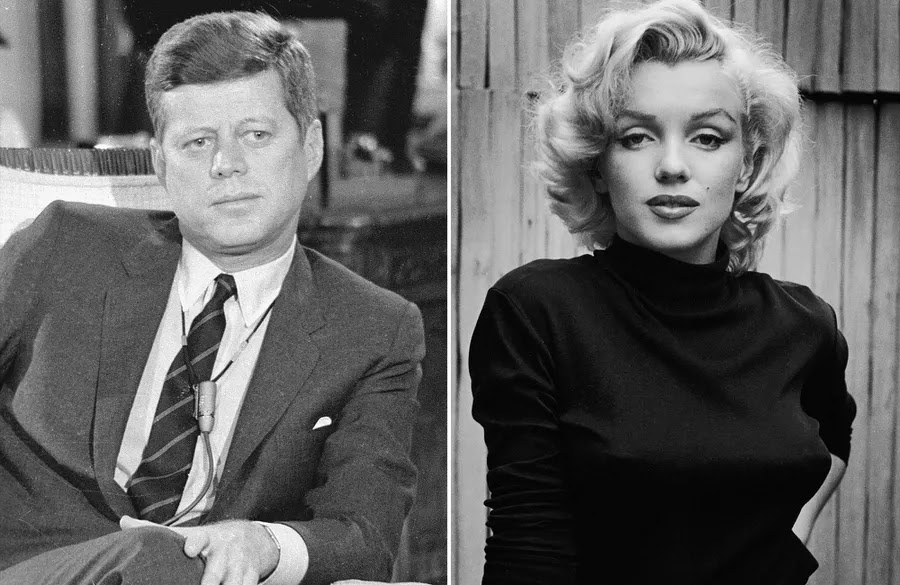 In 1973, Normal Maller was the first person to bring the idea of a Kennedy-Monroe affair to public consciousness but he has since said he "needed the money very badly" and knew that some like a Kennedy conspiracy into Monroe's death would sell some more copies. And we thought the era of "fake news" had just started!

As two of the most photographed and documented era of their time, there's barely a trace of Kennedy and Monroe even being in the same place at the same time each other.

For example, some had rumored the pair, in fact, first met at the Waldorf Astoria in 1957 and while they are certainly pictured there on the same night with their respective spouses, there is no photographic evidence or otherwise to show that they so much as spoke to each other.

It was also claimed that Monroe attended the Democratic National Convention in 1960, but she was in New York at the time.

While Marilyn's masseuse and close friend Ralph Roberts claims to have been on the phone with Monroe while she was in Palm Springs and that she put Kennedy on the phone soon after to talk about his bad back, the secret service detail at the house that weekend claimed it was on lockdown.

"Marilyn told me that this night in March was the only time of her 'affair' with JFK... A great many people thought, after that weekend, that there was more to it. But Marilyn gave me the impression that it was not a major event for either of them: it happened once, that weekend, and that was that," Roberts told Monroe biographer Donald Spoto.

When did Marilyn Monroe sing Happy Birthday to JFK?

Marilyn Monroe sang "Happy Birthday Mr. President" to JFK for his 45th birthday in Madison Square Garden on May 19, 1962 (ten days before his real birthday).

This performance is regarded by many as proof that an affair was taking place, believing Monroe to have been luring the president to her with her breathy singing and that Monroe's presence was the reason why Jackie was not at her own husband's birthday party.

Monroe was known for her sexy performances, however, a part of the stage persona that she used for her performance character while Jackie simply didn't attend because the birthday was also being used as a political fundraiser, the like of which she normally declined to attend.

What the birthday bash did give us though is the only known genuine photo of Monroe with either of the Kennedy brothers (seen above), a photograph only released in 2010 by White House photographer Cecil Stoughton.

What about the Marilyn Monroe, John F. Kennedy Rolex? 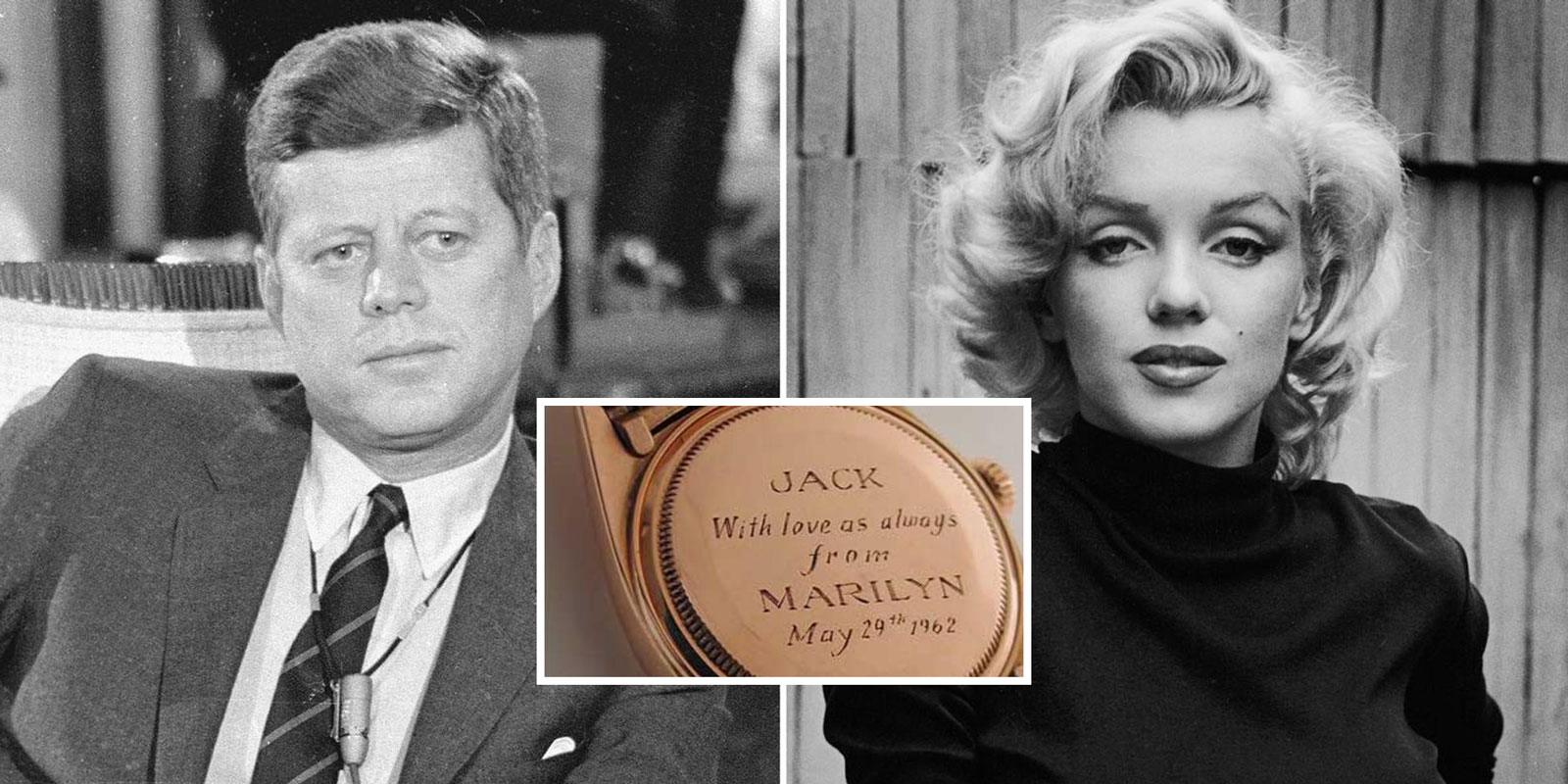 Monroe is alleged to have given Kennedy a Rolex in the event of his birthday and the watch sold at auction a decade ago for $120,000. The gold Rolex is inscribed: "Jack, With love as always from Marilyn May 29th, 1962" and it is said the actress had given the watch to Kennedy aide Kenneth O'Donnell, who passed it on to the president, but when Kennedy saw it, he told O'Donnell to "get rid of it," according to a note that was sold with the watch.

Did Jackie know about JFK and Monroe?

The Kennedy affairs were believed to be numerous throughout his ten-year marriage to Jackie Kennedy and he even stands accused of using his special assistant Dave Powers to line up willing women.

“If I don’t have sex every day, I get a headache,” John F. Kennedy used to tell most people who would listen, according to the NY Post.

There are some speculations and rumors that Jackie Kennedy knew of a relationship between Monroe and her husband if there was one, and that it was the one that annoyed her the most.

The Palm Springs weekend is said to have been the extent of their physical affair but that didn’t mean Monroe didn’t want it to continue, allegedly seeing herself becoming Jack’s second First lady and even calling Jackie Kennedy to tell her so.

According to “These Few Precious Days: The Final Year of Jack with Jackie,” the First Lady replied, “Marilyn, you’ll marry Jack, that’s great . . . and you’ll move into the White House and you’ll assume the responsibilities of the first lady, and I’ll move out and you’ll have all the problems.”

Their mental health of Monroe had long been a cause of concern for the President until she mysteriously took an overdose in 1962.

How much of this can be believed, however, when she is also rumored to have been calling the Kennedys frequently in the days before her death when her phone records only show her making calls to the Department of Justice where RFK would have been.

What about JFK's brother and Marilyn?

It was also speculated that Monroe had a fling with Robert Kennedy. Letters were found from Jean Kennedy Smith, younger sister of Bobby Kennedy, in which she describes, from what it sounds like from her interpretation, a relationship.

Did the alleged affair play a role in Marilyn Monroe's death?

Many have claimed that it was Marilyn's supposed threats to hold a press conference revealing her affairs with both Kennedy brothers which left to others to end her life. Her biographer James Spada does not believe this, however, but he does claim that “it was pretty clear that Marilyn had had sexual relations with both Bobby and Jack.”

Others are still not so sure that the Kennedys did not play some role and in a 1983 BBC interview that Monroe biographer Anthony Summers conducted with her live-in housekeeper, Eunice Murray, he said there was a “moment where she put her head in her hands and said words to the effect of, ‘Oh, why do I have to keep covering this up?’ I said, ‘Covering what up, Mrs. Murray?’ She said, ‘Well of course Bobby Kennedy was there [on Aug. 4], and of course, there was an affair with Bobby Kennedy.’ ”

Spada believes there was a cover-up, but not of her murder. “The Kennedys could not risk this coming out because it could have brought down the President. But the cover-up that was designed to prevent anyone from finding out that Marilyn was involved intimately with the Kennedy family has been misinterpreted as a cover-up of their having murdered her,” he said.

Whether you believe the rumors or not, the media wanted to use the success of these two for some publicity. Monroe’s sensuality, good looks, power, and admiration from around the world were taken advantage of a few too many times. President John F. Kennedy and Marilyn Monroe were two of the most loved public figures across the world, and pictures spoke a thousand words even if it wasn’t the whole truth.