True Blood star Anna Paquin never had a nuts and bolts career plan, yet this has served the Oscar-winning actress extremely well.

“I'm attracted to good writing and a lot of creative, talented people, and that is really the only common thread linking all of my work,” the 36-year-old Paquin exclusively told Parade.com. “I don’t have an overall plan, per se, for what I want to do at various stages in my life, it's just a little more freeform than that.”

Her stellar acting adventure began when she was chosen from 5,000 candidates to play Holly Hunter’s daughter in The Piano, for which she won the 1993 Academy Award for Best Supporting Actress at age 11.

This led to other film and TV roles, and her starring turn in True Blood, opposite her husband Stephen Moyer, who is producing Flack, her edgy new series that boasts several strong female characters.

Flack, a six-episode original limited series, delves into the fast-paced and cut-throat world of celebrity public relations and reflects the brutal reality of modern life where problems can go viral in an instant.

Among the countless crisis situations, Robyn (Anna Paquin) and her capable team are involved in counseling high-profile personalities in entertainment, fashion, and sports. They deal with everything from a client’s infidelity and pulling off a celebrity wedding to a young pop star who orchestrates a sex tape to change her image.

Paquin and co-stars Sophie Okonedo, 50, (Hotel Rwanda) and Lydia Wilson, 34, (Ripper Street), talk about the unique culture created in Flack, what it is like to work with so many fabulous women and why they hope viewers will enjoy the new series.

Okonedo says that having all the main characters being women has been a thrilling experience. “Each of them is really interesting and diverse, and it added a real excitement on the set. It was a really great place to be, and we had enormous fun.”

Instead of heading back to their trailers, Okonedo said she and her co-stars were all in on female bonding. “When they were setting up for a new scene we would all get into a little corner, huddle down, kick our high heels off, put our feet up and have fun joking around.”

She said that she and her co-stars appreciated having Paquin there both as a co-star and producer. “Anna is really hands-on, and after one scene we felt really looked after all of the time. It was just nice for us to go to work each day.”

For the role, she spoke to a few PR people, to find out how realistically Flack depicts the celebrity scandals it portrays. “When I asked them they were like, ‘no, no, no, this is not over the top. I’m worse,’ which looking at it page after page was a little shocking.”

Okonedo said she hopes that viewers will see what she saw when she read the first script. “It’s very cunning, surprising, quite shocking, and hilariously funny,” she explains. “I was gasping when I turned the pages.” 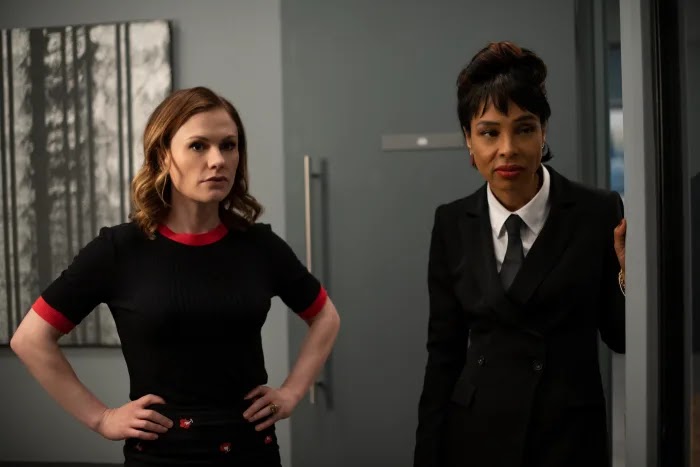 As a result of social media, Paquin and Moyer hear frequently from True Blood fans, and they are hopeful they will follow them to Flack and beyond.

“The very loyal and loving people who adore True Blood make their voices heard and they are incredibly supportive of pretty much everything that me, Steve, or any other [True Blood] cast members care about. We couldn’t be more grateful for our strong following.”

Hopefully, Paquin says the aims is for Flack to “entertain people, make them laugh, and provoke them,” she explains.

“The show asks a lot of interesting questions about morality, the nature of truth, where we get our information from, and how do you know that you are seeing is the whole story,” she says. “The show also asks, would you cover that up for somebody, how important is being good at your job versus being a person that you can live with at the end of the day, and look yourself in the mirror and feel okay about who you are?”