And Felicity Jones appeared to be reveling in off-duty chic as she was spotted leaving her London home on Tuesday.

The 33-year-old British beauty slipped into a pair of waist-cinching denim while she carried a white dress bag over her shoulder.

Her figure-flaunting jeans boasted a mom fit as they grazed her ankles - showcasing her navy pumps while she maneuvered around a blue bin. 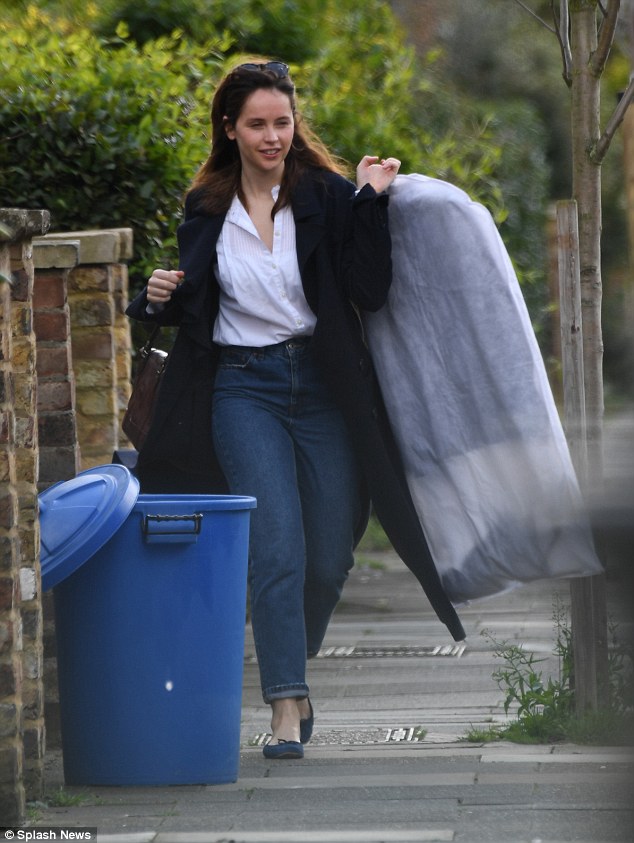 The film darling - who received box office success with her movie Rogue One: A Star Wars Story earlier this year - teamed her denim look with a crisp white shirt that she left stylishly unbuttoned to tease at her decolletage.

Wrapping up for the Spring season, she wrapped a wool navy trench around her petite frame while her leather bag draped over her forearm.

Her brunette tresses were firmly secured off her face as she placed her sunglasses on top of her head, highlighting her flawless beauty.

The Birmingham-born beauty's laidback appearance comes after she  previously revealed she likes being able to walk around London unnoticed.

Speaking to The Daily Telegraph, she said: 'I am quite fortunate, because I can still be quite incognito.

'If you go out looking for attention then you’ll attract it, but if you’re just getting on with your life, particularly in London where everyone is engrossed in what they’re doing, you can keep a measure of anonymity.'

The Inferno star has had a busy year so far, soaking up the biggest award show on the acting calendar.

She is no stranger to the red carpet after she was nominated for a clutch of honours for her performance in 2014 film The Theory Of Everything, including a BAFTA, Golden Globe and Oscar.

At this year's BAFTAs, Felicity presented the best supporting actor award to Dev Patel for his appearance in Lion.