Nicole Kidman came dangerously close to suffering a wardrobe malfunction as she attended An Evening Honoring Louis Vuitton and Nicolas Ghesquiere at Alice Tully Hall in New York's on Thursday.

Battling with the high winds outside the Lincoln Center, the 50-year-old Australian actress was forced to clamp her hands down on her gown as she risked baring too much in the leg-flashing ensemble.

With her tanned and toned pins on display, the blonde bombshell's modelesque height was boosted by her barely-there heels - although she nearly stumbled in the towering shoes as she tended to her dress.

Undeterred by the mishap, Nicole laughed her head off before regaining her regal pose and posture. 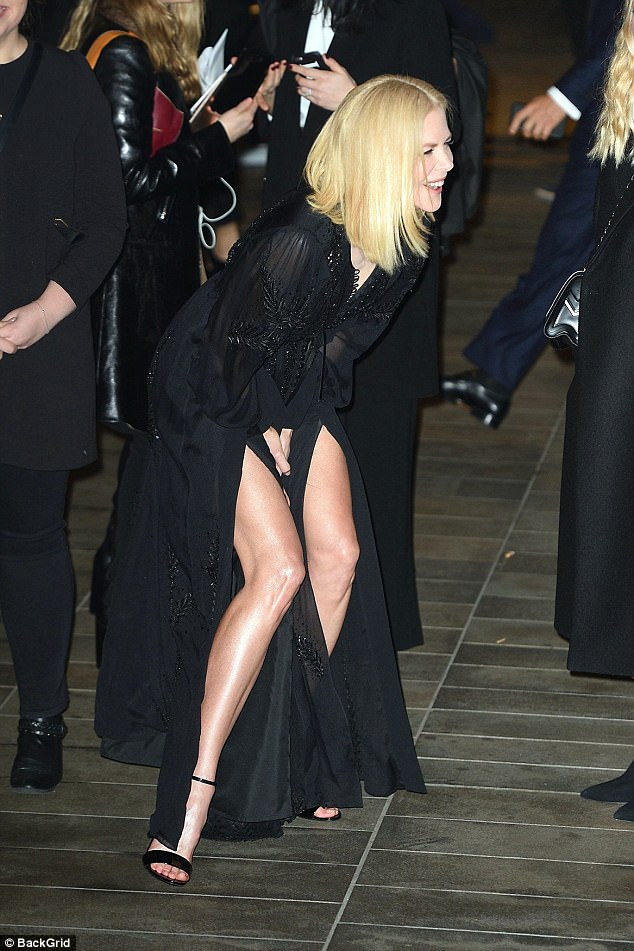 For the evening, the Hawaiian-born Australian easily defied her 50 years showing a little leg in a black embellished, puff-sleeved maxi-dress and matching heels selected by stylist Julia von Boehm.

The Killing of a Sacred Deer actress went extension free for the fashionable festivities, wearing her platinum blonde bob down and center-parted.

There was no sign of wrinkles on Nicole, who sported minimal make-up aside from mascara and a hint of blush.

The two-time Emmy winner - who plays Celeste Wright on the HBO Hit series - recently told Yahoo that 'fingers crossed' they'll be back 'in production the beginning of next year.'