When she’s not at a major award show, or filming a huge movie, she’s usually making appearances on U.S. chat shows. Last night, she appeared on Jimmy Kimmel.

At the beginning of the interview, her curiosity got the better of her, because she had to stop and ask Jimmy why there was a weird line on his wooden table. 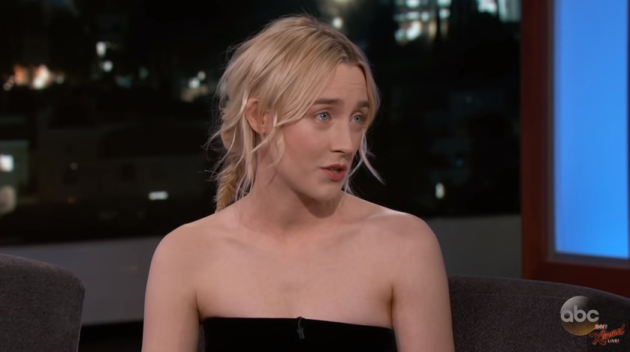 As a result, Jimmy revealed a Jimmy Kimmel Live secret. That’s a mark so he knows where to hold a recorder belonging to whoever’s performing each week so that the camera can see it properly

I was in the foreground of this camera shot, being like “Oh yeah! It’s just so great to be here.” My mam was in the background, and she had this dress that had a long train, and George Clooney was stood on the train, and he didn’t realise.

My mam had never been on the red carpet before, and she’s in the background while I’m like “Oh the Oscars are great!” and she’s like “Excuse me!”

Saoirse’s mam tried her very best to get George Clooney’s attention so she could tell him to get off of her dress. Her mam continued:

“Excuse me! George! Excuse me!” and she kept tapping him on the shoulder and he won’t turn around. It got more and more aggressive and she’s like “GEORGE!”

Eventually, he sauntered off without knowing what he had done. Saoirse’s mam ran over to her to tell her the story. “You’ll never believe what George Clooney just did to me.”

Herself and her mother were hanging out in the bar, thinking they had loads of time.

Everyone’s chatting away outside, and it’s very exciting and stuff and everyone started to queue up to go in. All of a sudden we hear “AND NOW! THE 88TH ACADEMY AWARDS!” And they locked the door and we were outside. We barely made it in because I needed a drink.

She said she felt bad for him when the rest of the cast were drinking but he was left out because he was only 19 at the time. She also told the story of what happened when she used a fake ID in America.

I just know the pain, of going out with a crew that you’re working with on a Saturday, and you’ve been drinking for a few years at home and you know what you’re doing, and you go out with everyone, and you’re the only one that’s turned away.

I only used one once, and I wouldn’t recommend it to anyone. It’s ironic that I’m an actor and it terrifies me so much to pretend that I’m someone else. My friend, we were going into this club, I was about 19 or 20 at the time, and she wanted to go to this really cool club. She said ‘Listen, I’ve a spare ID. Just take this’. I was like ‘What do I say if he asks me questions? Should I do an accent?’

Saoirse practiced her New Zealand accent in the queue, made up a whole story about her fake ID’s character, put loads of effort into convincing the bouncer. When she reached the top of the queue, she was disappointed when the bouncer was like “Yeah, cool. Go ahead.”

Happens to the best of us, tbh.