Queen of the South became popular with Netflix viewers in the west almost as soon as it dropped on the streaming service’s website earlier this year. As speculation is rife over what is to come in season five, it seems the lead actress has dropped a hint at a softer storyline for her character, Teresa Mendoza (played by Alice Braga). After all, the drug empress has endured much hardship over the years and it is only fair she is allowed some romance too. Could Teresa and James Valdez (Peter Gadiot) be due a happy ending?

Way back in season one, Netflix users saw Teresa begin as a poor woman from Mexico who grafted hard to make money by running a successful drug empire. 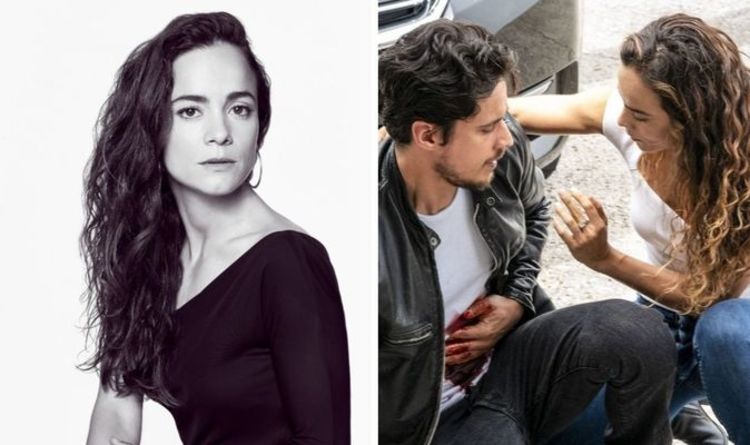 In the latest installment, she ended up in New Orleans, where she hoped to expand her business and eliminate those who dare stand in her way, once and for all.

Many fans have been curious as to whether or not Teresa and James will end up together.

There has been palpable sexual tension between the two characters in many scenes.

Now, Alice, who plays the protagonist has spoken out about their relationship and whether anything more can come from it.

In season three, Teresa and James had a heart to heart, and Teresa lent in to kiss him.

This led to the two of them falling into bed with one another.

But fast forward an episode later, Teresa was kidnapped and their relationship was derailed.

Other problems also ensued, and the season ended with James leaving Teresa in order to protect her.

The video, which has also been posted to YouTube and took place last summer see Alice remark: “Miami! Well, it turns out we’re going to Miami a little bit… let’s see how it goes.

“‘Come on, I love you and James!’” She reiterated a comment she was sent.

“Thank you, a lot of people say that,” Alice replied.

“Therese and James started off as being [butting heads] with a hard relationship, but, it definitely got people really curious about it.

“I think it’s love and hate, that makes it spicy and we definitely had that - since season one, it was something we could feel in the air,” she added.

“‘I love James!’” Another fan said and Alice read out.

“I love that everybody loves James. He was always saving me, he was really special.”