From a Hollywood child star to a modern ingenue, Dakota Fanning's rise to success has been seamless and without scandal. She tells Martha Hayes where it all went right.

Dakota Fanning has an eye roll that is so spectacular, it deserves its own meme.

Becoming famous at the age of seven, followed by 16 years of being asked the same questions repeatedly, has given her ample practice.

The worst offenders allude to how much she’s ‘grown up’ since making her Hollywood debut in I Am Sam (2001) (becoming the youngest actress in history to be nominated, at eight, for a Screen Actors Guild Award); what it was like ‘working with Tom Cruise in War Of The Worlds (2005) 12 years ago; and finally, isn’t it a miracle that she didn’t ‘go off the rails like so many other child stars. Ugh. 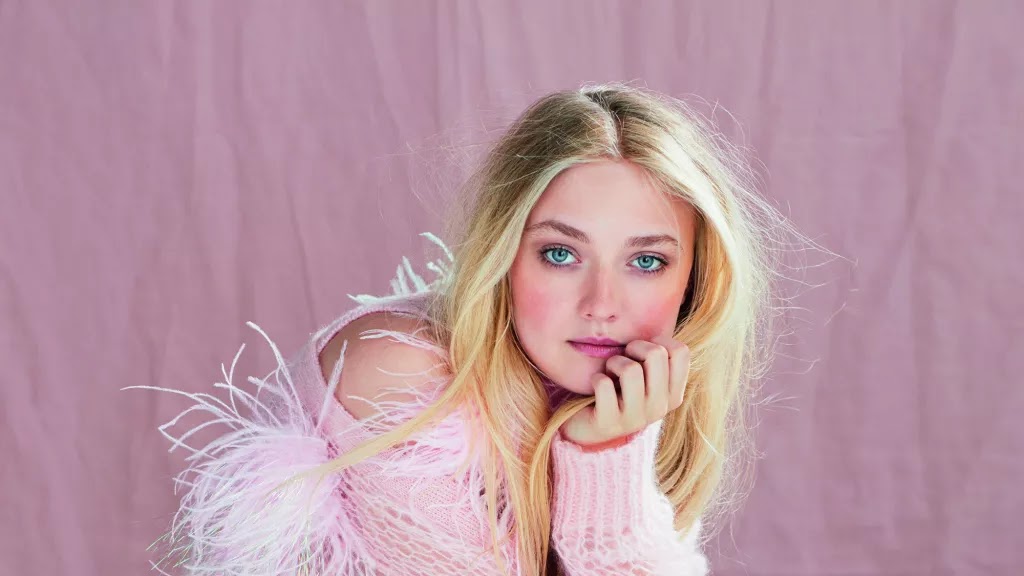 And so it becomes my mission when meeting the now 23-year-old in London for our cover shoot to not give her any opportunity to roll her eyes.

Settled on a big sofa in the middle of a bustling studio on a balmy Sunday afternoon, I tell her I’m assuming she probably has gone off the rails in secret and ask her what’s the wildest thing she’s ever done. ‘It would absolutely not be printable,’ she says laughing, clapping her hands. Definitely no eye roll here.

‘It always cracks me up when people talk about how I haven’t gone off the rails − which I have not, by any means − but you know, I’m a normal person. I love a party and I love having people over for any occasion since I’ve had my own apartment in New York. I’m always like, “You can stay with me!” I don’t cook, but I make cocktails. I make a good margarita.’

Comfily dressed in a navy ribbed sweater and slouchy navy sweatpants, Dakota Fanning has just flown in from Budapest, where she’s spent the last six months filming psychological period drama series The Alienist. Described by Netflix as ‘a headstrong secretary determined to become the first female police detective [in 1870s New York],’ Sarah Howard sounds like a dream of a role for Fanning’s first foray into the golden era of television.

Her commitment and attachment not only to the part but to the cast (including Luke Evans and Daniel Brühl) and crew, makes me warm to her quickly. Not just because, on a superficial level, she sounds really fun (‘On one of the first nights they threw an event and I stole all the actors and took them back to my apartment. That was my first party…’) but because she talks with honesty and sincerity when she could so easily be more jaded.

She is a stickler for routine, and while signing up for a six-month TV show could be daunting, she admits she found it comforting. ‘I like knowing where I’m going to be and making myself at home. [I] work so hard to get comfortable and get to know people. I love the life I’ve had in Budapest.’

As a result, she found reaching the end of the project quite emotional. ‘When you wrap your scenes, the producer or director might say a little something about you. And when they did, I just burst into tears and sat there crying in front of the entire cast and crew.’

Dakota Fanning on growing up as a child star

Always the ingénue and constantly defined by her childhood roles, which also include Charlotte’s Web (2006), or her teen roles in Twilight (2009, 2010, 2012) or The Runaways (2010), I tell Fanning it was refreshing to see her in Ewan McGregor’s American Pastoral last year playing a political terrorist (and with a convincing stutter to boot). ‘But you know what would crack me up? People would say that was my “grown-up” role. I was playing a 16-year-old. That was my grown-up role!’

Around the time of making American Pastoral, Fanning pushed herself out of her comfort zone further by playing a mute wife and mother in the western thriller Brimstone alongside Guy Pearce and Kit Harington(opens in new tab). She is keen to direct, and will produce as well as play the protagonist in the much-anticipated big-screen adaptation of Sylvia Plath’s The Bell Jar, directed by her friend Kirsten Dunst.

‘I am definitely ambitious,’ explains Fanning, who is also enrolled on a women’s studies course at NYU, with a focus on the portrayal of women in film and culture. ‘I’ve never been the kind of person who has been like, “I want to do this, this and this, and then I’ll be happy.” Professionally, I am very ambitious but those ambitions reveal themselves, subconsciously, as the challenges come along.’

She’s aware that she is lucky her love of the profession has ‘never wavered’ when a lot of her friends are still figuring their lives out. But in an Insta generation where most actors have a fashion line or a lifestyle platform, does she feel a pressure to do something on the side?

‘I do have moments where I feel like nowadays being just an actor isn’t enough. I was listening to Anna Faris Is Unqualified, which I love, and I was like, [in a paranoid whisper] “She’s an actor. Now she has a podcast… am I supposed to get a podcast?!”

‘It used to be that if you were an actor and you did certain things, it was cheesy, but things are changing so much. I like that the lines are blurred and you’re allowed to do those things. I just don’t know if I have anything I would feel authentic doing yet, because we can tell when it’s not real, right? When somebody doesn’t actually believe in what they’re doing?’

Does that make Elle, her younger sister also in the industry, her sparring partner? They certainly know how to wind each other up. ‘She thinks I’m turning into our mom, which I guess is inevitable for everybody, I don’t know. She’s like [puts on moany voice], “You and Mom – you’re like two moms!” Our mom is a constant reminder of “don’t forget to do this, and don’t forget to do that” and I am turning into a reminder. I can’t help it.’

Jokes aside, despite being in the same competitive industry, Fanning and her famous sister have a great relationship, largely because of how organically both their careers developed. ‘All of a sudden, it kind of happened and we kept going because we enjoyed it,’ she says. ‘But we don’t talk about it that much. We have our own separate relationship with what we do. We’ve never felt the need to get into it.’

The four-year age gap hasn’t always been easy. ‘There are a few years where you’re both experiencing such different things; age nine and 13 – nothing in common; 12 and 16 – we didn’t know what to do with each other. Now as she’s getting older and I’m getting older we’re getting closer… and that’s really lovely.’

As separate as they view their careers, isn’t it likely they’ll both go up for the same role one day? ‘We’ve had scenarios where we’ve gone to meet the same person and it’s totally fine. To us, we’re so different.’

In the time I’ve spent with Fanning, I’ve discovered she is fun-loving, loyal, ambitious and passionate about New York, where she’s lived since she was 18 – not bad going considering she once said, ‘If I can achieve it, I don’t want anyone to know anything about me.’

‘I know, I don’t really say anything!’ She’s reluctant to talk about relationships, money or politics. ‘I do still feel that way. I think there’s something cool about being a little mysterious, which is hard to do nowadays.’

She initially resisted joining Instagram(opens in new tab) (she now has 1.8m followers), ‘but I would get frustrated with people talking about my “grown-up” roles’ and she wanted the right to reply. ‘I thought, I’m not making that big of an effort to show people who I actually am.’

Hers is an unselfconscious and casually curated feed of ‘little flashes of my sense of humour or things I care about.’ I couldn’t help noticing her love of Whispering Angel rosé wine. ‘Oh my god, it’s the best,’ she cries. I had been tempted to bring her a bottle as a gift, but I didn’t want her to take it the wrong way. ‘I would have welcomed it with open arms,’ she reassures me. ‘And we would be drinking it right now!