Doja Cat’s career has only just started gathering momentum but she’s already facing her toughest time yet after becoming embroiled in a racism scandal.

The Say So rapper is accused of taking part in what has been described as ‘racist incel’ chat rooms before she found fame.

While Doja, 24, admits she shouldn’t have used the chat rooms, she vehemently denies being racist. 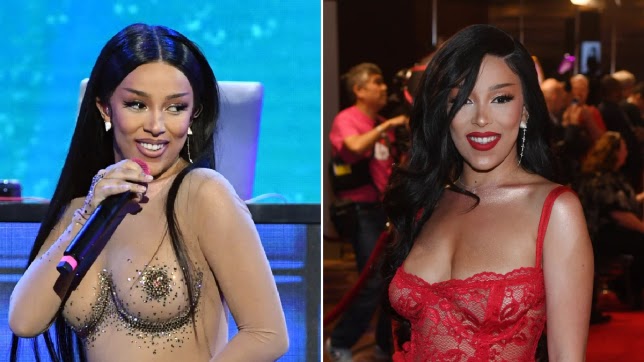 Doja has just celebrated scoring her first number-one single on the Billboard Hot 100 chart with Nicki Minaj and their Say So remix. It’s also a career first for Nicki who, despite releasing hundreds of songs over a decade, had never reached the chart summit until now.

But both career highlights have been completely overshadowed.

While Nicki is yet to speak out publicly about her collaborator’s scandal, Doja has issued two apologies to fans – first in an Instagram post and later with a live stream in which she stated: ‘I’m sorry if I hurt you, or embarrassed you, or made you feel in any way upset.’

So although #DojaCatIsOverParty was a top Twitter trend over the weekend, is it really over for Doja or can she bounce back?

‘I think the apology was genuine. The way it was delivered wasn’t the best,’ celebrity and reputation manager Mayah Riaz told Metro.co.uk.

Riaz continued: ‘People ultimately have long memories. She isn’t a big enough name in order to make a mistake and come through it…

‘For Doja Cat, she is going to find it difficult to be linked with other artists as they would not want their name to be associated with her. She is just rising to fame, so I’m not surprised past conversations are coming to light that could be damaging.’

According to Riaz, the worst thing Doja could do now is go into hiding as the expert believes continuing to confront the issue will be the best way to prove her sincerity.

‘If Doja Cat really wants this not to have a negative impact on her then I hope she has good management around her,’ Riaz stated.

‘She will need to do interviews addressing this and not hide away from it – and not just via her social media channels.’

Celebrity crisis manager Tom Bourlet agrees with Riaz and said: ‘A PR crisis can be a nightmare, but it doesn’t have to end her career, especially when she’s only just starting.

‘She needs to directly address the areas she spoke about, offer the reasons for why she did so, but also deeply apologize, not just for offending anyone but also to highlight that she understands what she said wasn’t right to say.

‘Her actions in the future can also make a strong impact. It might sound shallow, but charitable acts always help to repair the damage, albeit not completely fix it.’

Sharing his predictions for Doja’s next steps, online reputation expert Simon Wadsworth said: ‘Scandals like this, especially when they are about polarising issues like race can do long-lasting damage to a person’s reputation.

‘Social media has changed the landscape for musicians, artists, film stars to say the least. The always-on culture means that a crisis could deal a critical blow to someone’s career…

‘Fans will expect her to live by this apology and avoid any other controversies, therefore showing it was a one-off mistake.’

But he added: ‘She should continue to own her brand and presence online, and because of the current pandemic fans will expect her to continue using social media to connect with them directly.’