Emilia Clarke has admitted that she struggled with royal protocol when meeting Prince William for the first time this year - revealing that she had a bit of an embarrassing moment with the Duke of Cambridge! When asked about the meeting during an interview on Late Night with Seth Meyers, she said: "It was good," pulling a nervous face to the laughing audience. She further explained: "So it is a frightening thing going to the palace. There’s a whole… there’s a thing.

When you’re there, I was just relaxing and they [said], 'Prince William is coming,' so I was like, 'Oh cool, great. I'm really relaxed and everything is going to be fine."

She then added, regarding the protocol: "They were like, 'You can’t turn your back,' so I was like, 'No worries,' and they said: 'You have to address him as your Royal Highness’. Then after that, you can call him Prince William and there are lots of formalities that you need to kind of adhere to. 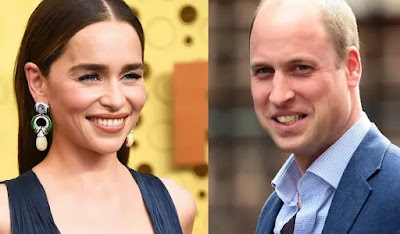 "For whatever reason, maybe because I was so scared, I couldn’t manage to get out ‘Your Royal Highness," she continued, even acting out the awkward handshake with the chat show host. "So it was kind of like 'ra… ra…', it was pretty much all I managed," she giggled.

Perhaps the actress' nerves were down to the fact she is a big fan of the royal family since she revealed earlier this year that she skipped her own personal screening of her film Solo: A Star Wars Story to watch the Duke and Duchess of Sussex's royal wedding in May.

She told Jimmy Fallon at the time: "I had a screening of the Star Wars movie that I'm in for my friends and family on the day. I didn't get my dates right, so I didn't realize - I sort of thought no one would turn up - but then they did, so then they watched the movie and I watched the wedding."