And the ginger goddess played Jenny McCarthy as she portrayed the 'vixen of anti-vax' to enjoy a verbal row with the rest of the daytime talk show hosts. 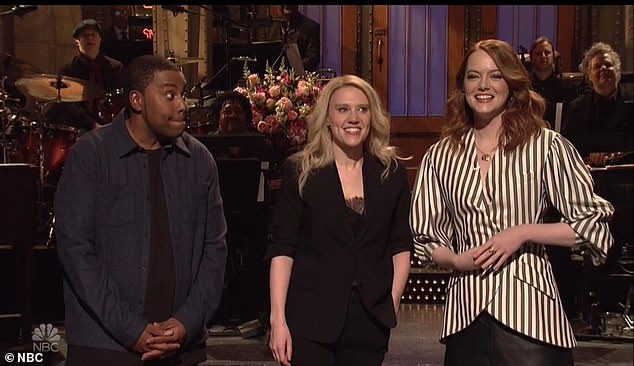 The episode opened with a parody of the college entrance cheating scandal as prisoners compared how 'crazy' they were to land in jail.

'Son, I'm the craziest dude in here. Stabbed my neighborhood to death and then ate his fingers so they couldn't I.D. The body' said one prisoner.

But suddenly Lori Loughlin played by Kate McKinnon appeared to set the record straight as the 'craziest' of the inmates.

'Oh, yeah? Do you think that's insane? I paid 500 grand to get my daughter into USC,' Lori explained.

'You heard me. I paid 500 grand to a women's crew coach to say my daughter was good at rowing. I'm loco.'

'Oh, yeah. And that's not including the 300 grand I blew on tuition,' Lori said.

'Oh, my god. What did your daughter major in?' asked the prisoner.

'Communications. Yeah. And you know what her job is now? She's an influencer on Instagram,' Lori said with aplomb. 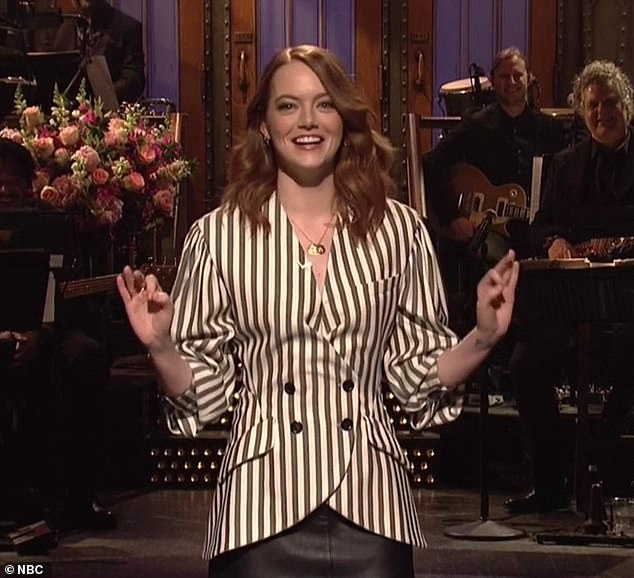 'Stop it. I can't hear anymore. Guards, get her away from me!,' the prisoner explained.

During the monologue, Emma thought the cast was planning on something special even if she wasn't a part of the coveted 5-Timers Club.

But Keenan Thompson and Kate McKinnon had to pretend they had something planned as they faked their way through a song for Emma.

Aidy Bryant appeared as Emma thought she was going to receive gifts and gave Emma her own medical bracelet.

And the rest of the cast had to pretend they had special guests in store for the Oscar winner as they pretended celebrities were speaking to her as she was blindfolded.

The next sketch was a throwback to the last time Emma hosted the show. A teenager finds his bedroom posters come to life.

Emma plays a Maxim 'hot chic' only interested in being 'sexy' as the other posters attempt to lead the teenager on a better path.