Viola Davis‘ character Annalise Keating is getting frequent flyer miles at the Emmy Awards. For playing this savvy lawyer, Davis won Best Drama Actress for “How to Get Away with Murder” in 2015 (she was also nominated in 2016-17) and now she’s recognized as Best Drama Guest Actress for “Scandal” thanks to ABC’s landmark crossover. Davis is nominated for the “Scandal” episode titled “Allow Me to Reintroduce Myself,” part one of the TV event that aired on March 1 on the alphabet network. 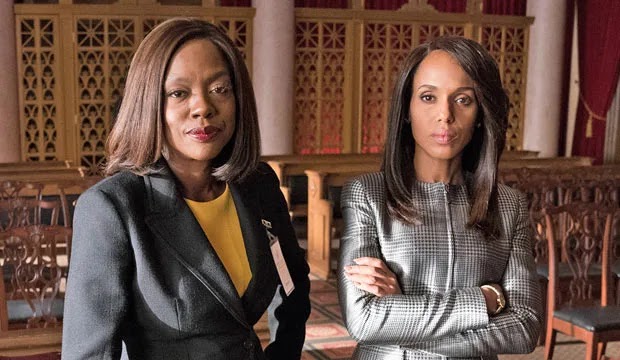 In “Allow Me to Reintroduce Myself,” Annalise needs help getting her case about racial injustice heard by the U.S. Supreme Court so she goes to Washington D.C. fixer Olivia Pope (Kerry Washington) for help. At first, the two powerful women butt heads, with Olivia telling Annalise that her controversial history will hurt the case, but they soon find common ground. Olivia takes Annalise to the White House where they meet with President Mellie Grant (Bellamy Young), but she surprisingly turns them down. Later, while at a hair salon, Annalise comes to realize that Mellie refused to help them because Olivia was fired from the White House on bad terms.

The episode ends with a scene that every Shondaland fan has waited years for, as Annalise and Olivia bond together over wine and popcorn. Can Davis earn a bookend trophy for playing Annalise on “Scandal” three years after winning for “HTGAWM”? Let’s delve into the pros and cons.

TV academy members love when Oscar winners are nominated for Emmys, and Davis is one of the newest recipients after winning Best Supporting Actress for “Fences” (2016). Having also prevailed at the Emmys and Tonys makes Davis a Triple Crown winner and one of the most respected actresses in Hollywood.

Seeing Davis and Washington go at it is an Emmy voter’s dream. While Davis is an Emmy winner, Washington earned back-to-back bids in 2013 and 2014 for “Scandal” and another two in 2016 for producing and starring in the telefilm “Confirmation.” Speaking of “Scandal,” this show has already won two Emmys for guest stars Dan Bucatinsky (2013) and Joe Morton (2014), so it’s easy to envision Davis being the third.

What happens with the Supreme Court case?! Since the “Scandal” episode is only part one of the crossover, TV academy members may feel confused since they’re not getting the full story of how Annalise’s case turns out. Of course, curious voters can watch the conclusion at the ABC website in the “How to Get Away With Murder” episode titled “Lahey v. Commonwealth of Pennsylvania.”

Despite winning two guest star Emmys, voters never fell in love with “Scandal” as much as TV viewers did. Might they instead want to honor one of their favorite shows like “Game of Thrones” (Diana Rigg is nominated) or “The Handmaid’s Tale” (Kelly Jenrette, Cherry Jones, and Samira Wiley all contend)? Voters could also choose to reward acting legend Cicely Tyson, who ironically plays Davis’ mother on “HTGAWM.”

Be sure to make your Emmy predictions today so that Hollywood insiders can see how their TV shows and performers are faring at our odds. You can keep changing your predictions as often as you like until just before the winners are announced on September 17. Be sure to also predict winners for the Creative Arts ceremonies slated for September 8 and 9. And join in the fun debate over the 2018 Emmy taking place right now with Hollywood insiders in our television forums. Read more Gold Derby entertainment news.