On Monday night, the "Break My Heart" singer asked her virtual guest, Gwen Stefani, about quarantining with her boyfriend, Blake Shelton, at his house in Oklahoma. However, Dua, 24, accidentally referred to Blake as Gwen's "husband."

"So I heard that you've been spending quarantine with your husband Blake Shelton at the ranch in Oklahoma," Dua asked innocently. "Who else was with you? How was that?"

Gwen smiled when she realized Dua's mistake and kindly corrected her.

"Um, well...he's not my husband, but that sounded cool when you said it," she said.

The pop stars both quickly laughed it off and continued on with their chat like professionals.

"We were actually on his tour right when we got shut down," Gwen continued, answering Dua's questions. "My brother was out with us...so his whole family came out. So it was me, my three boys, Blake, and then my brother, his wife, their two little babies, kids, and then her sister and then a friend." 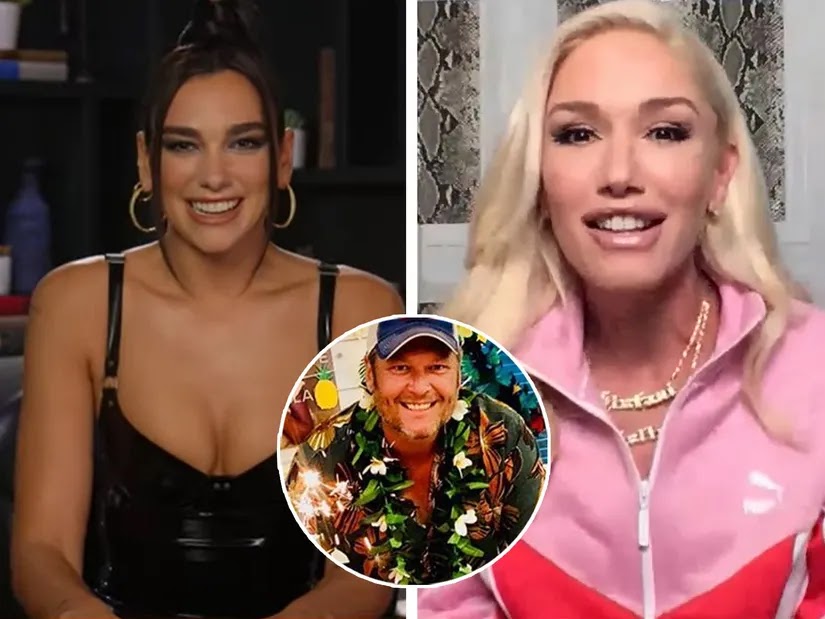 "It was really actually a lot of fun at first," she added. "Because it's like, all of the sudden, work is over and you just get to indulge and just being on this ranch...every day was like a new thing. A baby armadillo today, or we got baby wild hogs...we just have a lot of fun!"

Though the awkward moment wasn't mentioned again, in Dua's defense, Gwen and Blake, who began dating in 2015, have sparked engagement and marriage rumors in the past. In fact, Us Weekly reported in June that the two want to get married after the coronavirus pandemic.

As previously mentioned, the couple has been isolating in Oklahoma for the past few months.

During a virtual appearance on "The Tonight Show with Jimmy Fallon" back in April, the two performed a song together, while also showing off Gwen's haircutting skills. The "Hollaback Girl" singer gave Blake a fresh mullet.

Also in April, Gwen's ex-husband, Gavin Rossdale opened up about the "big dilemma" of co-parenting their sons -- Kingston, 14, Zuma, 11 and Apollo, 6 -- while they are in Oklahoma.

"I did the first two weeks with them, then they went to Oklahoma. They're on a 10,000 acre ranch," Gavin revealed in an interview with Trunk Nation on SiriusXM.

"It's okay for now and that is a real big dilemma for parents with split custody," he continued. "You're more mindful of like, I know who's around me -- no one. And I know who's bringing me the corona -- no one is."

"But, you send your kids out to someone else and they come back to you, and now you're prone to whoever they're with," he added. "It's a tricky one for all divorced parents."

Calling it an "unusual dilemma" for anyone in the same boat, the Bush frontman said it was "really hard" to be away from his boys for this long.

"I miss them and they should be back," Gavin explained. "Normally I have them every 5 days. At first it was like, cool, you can be super selfish, play that guitar more. But now, I'm like, I kind of prefer it when they're around, actually."