Holly Willoughby's jungle fashion during her stint on I'm A Celebrity has had the nation talking - but her outfit on last night's episode really took the biscuit. 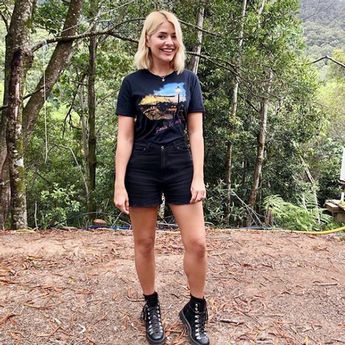 Because the 37-year-old presenter's slogan top made jaws drop for entirely the wrong reason.

Holly appeared alongside co-host Declan Donnelly to present the penultimate show of the 2018 series, which sadly saw Fleur East pack her bags and leave camp as the eighth evicted celebrity.

First though, she - along with Harry Redknapp, John Barrowman, and Emily Atack - had to take on the infamous Celebrity Cyclone Bushtucker trial, which saw them hosed with water cannons and pelted with giant balls as they struggled to haul enormous yellow foam stars to the finish line. 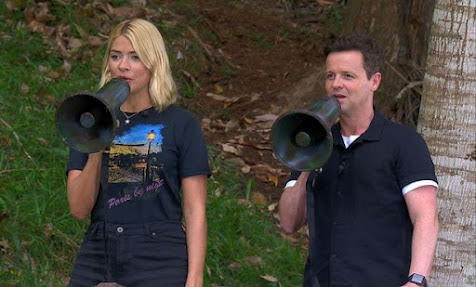 As viewers watched the four finalists battle the elements to win them a shot at the jungle crown, some fans were totally distracted by Holly's top.

She wore a navy t-shirt with an image of a cityscape on it, with writing at the bottom.

And a third said: "Genuinely though Holly’s t-shirt said 'Penis by night' for a second."

Holly's pristine outfit didn't last long, however - she had to swap her top and short denim shorts for a pink cape and swimming cap as she took on the Cyclone for her very first Bushtucker.

She competed with Extra Camp hosts Scarlett Moffatt, Joe Swash and Joel Dommett for a chance to win, and got completely drenched and dishevelled in the process.