Last month, Hulu’s holiday-centric horror series, Into the Dark, delivered its best installment yet. New Year, New You was intimate, unpredictable, and bolstered by a quartet of strong performances that delivered both scares and pathos. Only the fourth film in the Blumhouse-produced series, it set a high bar for the remaining 8 episodes to clear. However, this month’s Valentine’s Day release, Down, just set a new standard. 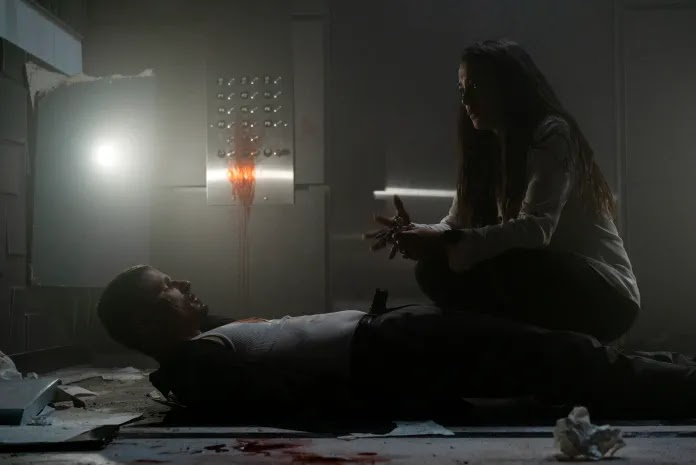 Directed by Daniel Stamm (Intruders, MTV’s Scream), it focuses on a couple who gets trapped in one of their office building’s elevators over President’s Day weekend. The boy is Guy (Matt Lauria), a charming, well-dressed accountant. The girl is Jennifer (Natalie Martinez), an account supervisor at a PR firm who is about to fly out to New York City to try to mend a broken relationship for Valentine’s. If they weren’t in a horror movie, it would be a great meet-cute.

Indeed, for its first half, first-time screenwriter, Kent Kubena, makes Down seem like a typical rom-com. Where Jennifer is frustrated and initially so cold she’s almost rude, Guy is sweet and seemingly unflappable. When Jennifer mentions that she’s thirsty and drink-less after their first hour, Guy insists she takes his only water bottle. When, a few hours later, she freaks out about having to pee in front of him, the way he makes a big show of turning around and covering his ears so she feels less embarrassed is so silly and sweet that it seems impossible that things could go as wrong as the film’s opening moments of foreshadowing suggest. It’s classic rom-com stuff and it’s no surprise when Guy and Jennifer’s small talk turns flirtatious.

Martinez and Lauria are the only actors onscreen for nearly all of the film’s 90-minute runtime, but their chemistry and Stamm’s direction keep things from getting boring. First and foremost, Stamm does a clever job of hiding how large the set really is. The “elevator” is enormous, more like one meant for freight than passengers, but each angle is carefully chosen to make the space seem limited. When they first get trapped, Guy and Jennifer are filmed in tight two-shots, but as the characters grow closer, they start to appear in the same frame. Stamm is also smart to keep the characters moving, circling each other as they talk and letting the camera move with them, making the space feel dynamic.

Still, clever as the camerawork is, the film simply wouldn’t work if Martinez and Lauria weren’t so compelling to watch. We know from the opening frames that this meet-cute is going to have a bloody end and for the film’s first half, it’s hard to imagine how things could go Lord of the Flies—even after four days stuck in a box with limited resources. However, when things go bad, they go very bad and while it would be criminal to spoil the film’s many twists and turns, let’s just say Kubena isn’t just playing with the rom-com form, he’s critiquing it by escalating all the ways a seemingly innocuous meet-cute can go wrong.

With nearly half of its planned twelve episodes released, Into the Dark is proving to be everything you could want from a holiday-centric horror anthology. And while each installment has been good, these last two have bordered on greatness. Down is precisely the kind of twisted take on romance we all needed to keep our buzz going after binging Netflix’s own dark “romance,” You. It may not be the most romantic thing a couple could watch on Valentine’s Day, but for any single movie watchers out there, it’s a reminder that sometimes no meet-cute is better than a bad one.