But Lily James briefly lost her composure as she took part in a game of 'Flinch' on The Late Late Show on Tuesday - causing her to swear live on air after a vegetable was unsuspectingly fired at her.

The 28-year-old British actress was given a martini as she stood behind a plastic see-through barrier as the show's host engaged her in conversation, before quickly propelling the food item at her - leaving her to swear in shock and horror. 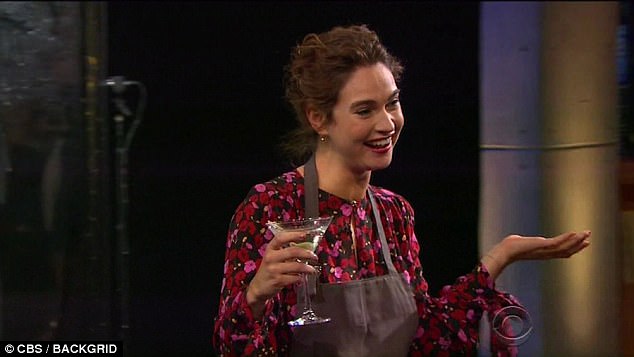 With Iggy Azalea, Kate Mara and Jane Krakowski waiting in the wings, Lily was first up for the fun game.

The main objective of the segment was to avoid spilling her drink no matter what happened.

The Surrey native seemed slightly apprehensive as she positioned herself behind the barrier and confessed to James that she was indeed a 'very flinchy person.'

And then within a split second, James fired the food at her, causing her to dramatically swear - which was beeped out.

James, as well as the rest of the audience, erupted in laughter as Lily shakily made her way back to the main stage with a half empty martini glass. 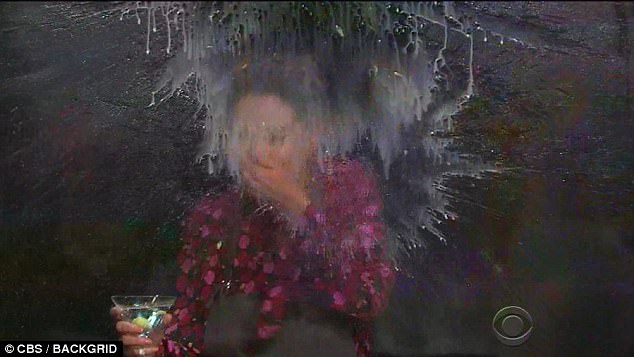 Her fun appearance comes after she seemed to be strangely shy about her hands as she enjoyed a low-key date night with boyfriend Matt Smith, 34, on Saturday at Matsuhisa, in Beverly Hills, California.

This was after Lily playfully dropped hints that engagement could be on the cards when she tried on a number of diamond rings at a De Beers event in Harrods, Knightsbridge.

Lily told The Daily Mail's Sebastian Shakespeare: ‘This is the diamond that has found its way to my finger.

‘It’s very unique. I would definitely want something like this.’

Lily and Matt have been inseparable ever since they embarked on a whirlwind romance in 2014.

The couple have been known to pack on the PDA in public as they can't keep their hands off of each other.