It's been a few months since The Fate of the Furious hit Blu-ray, leading one of the film franchise's leads, Michelle Rodriguez, to take to social media to complain about the treatment of its lady characters. She said at the time that she might quit before Fast & Furious 9 if her character's relationships with other women did not change, but she now seems to be backtracking from her earlier words. In a recent interview, Michelle Rodriguez revealed that Vin Diesel has been working to convince her to stick around, which meshes with some of the stuff the two have shared in recent months. She said,

The comment above squares with what happened back in June, when Vin Diesel and Michelle Rodriguez met up to talk about her threats to quit. At the time, Diesel seemed to be in Rodriguez's corner, noting that the franchise needs to "reach higher each time" in order to keep being successful. And from what Michelle Rodriguez is now saying, she and Vin are both fighting for women to take on a bigger role in the franchise, and that should convince her to stick around. 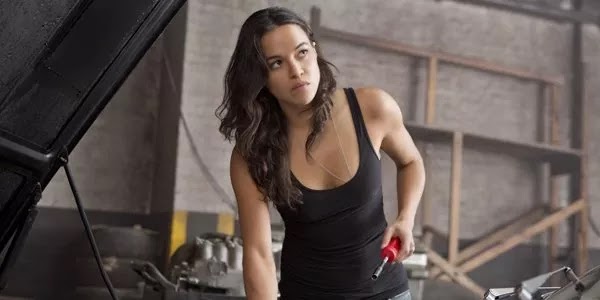 During the interview with THR at the Deauville Film Festival, Michelle Rodriguez also noted that her big issue with the Fast & Furious franchise was that the women in the movies aren't treated the same as the men (although those films have at least passed the Bechdel Test). Although she is the most prominent female performer in the franchise, she still believes she doesn't get much screentime with other women, and that led her to think her tenure with the series may need to end to give her the availability she craves to take on more female-oriented gigs. Per Rodriguez,

We always see the guys talking, we know what they're thinking and we know their relationships, but I can count with one hand in eight movies how many times the women talk to each other. So it's, 'Who are they, what are they about, and do you care?' I just brought up a question, and if that doesn't get answered and as I start on this path [of more dramatic roles], I just wonder if our paths meet at all.

This is similar to the comment Michelle Rodriguez made in her initial rant on social media. Earlier this summer, Michelle Rodriguez revealed that she "might have to say goodbye" to Fast & Furious should the films continue to not "show some love" to the ladies who work on the films, including actresses like herself, recent additions like Charlize Theron and Helen Mirren, or former big names including Jordana Brewster and Gal Gadot. Still, we should point out this isn't the first time that Rodriguez has considered quitting the franchise, although it's certainly the most recent.

So, if you are wondering whether or not Michelle Rodriguez is going to be back for Fast & Furious 9, the answer is likely to be a yes. However, with Rodriguez and Vin Diesel fighting for more meaningful relationships between the ladies in the film, the next movie in the franchise may look a little different than past outings. It'll still be a while before we see what that looks like. Fast & Furious 9 isn't expected to hit theaters until April 19, 2019. In addition, the 10th film has also been scheduled for April 2021. For now, would you like to see Letty return?