She's been burning the candle at both ends while promoting Suicide Squad - and it seems her busy schedule has finally taken its toll on Cara Delevingne.

While she stunned on the black carpet at Monday's world premiere in a plunging metallic studded mini-dress, the 23-year-old couldn't hide a collection of painful-looking red sores all over her body. 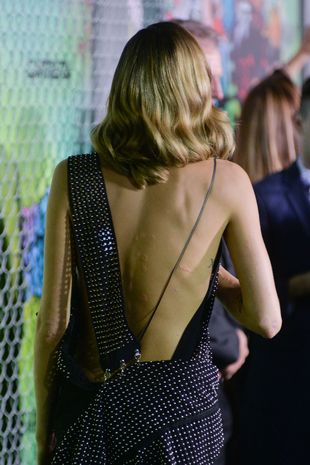 With her skin exposed, it was clear to see that the British beauty had attempted to cover the marks with makeup and while they looked slightly faded, they were still evident.

Cara has spoken openly in the past about suffering from stress-induced psoriasis which could explain her sudden outbreak.

Her heavy workload promoting Suicide Squad has seen her traveling across the globe, with late nights, jet lag, and stress perhaps causing the skin condition to flare up. 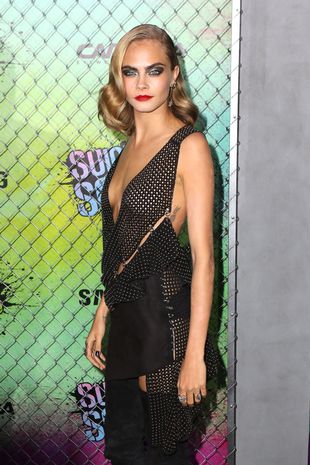 Her psoriasis first came to light during Paris Fashion Week in 2013.

At the time she said: "It only happened during the Fashion Weeks, which are, of course, the worst time of year for me to be covered in scabs. Psoriasis is an auto-immune disease, and I’m sensitive."

While she was joined on the carpet by her co-stars, including Margot Robbie and Will Smith, her girlfriend, singer St Vincent, avoided the spotlight to let her lady take center stage.

But she was still on hand to lend her support, having been spotted leaving the Greenwich Hotel with Cara ahead of the premiere.

Cara recently opened up to Vogue magazine about how she is head over heels for St Vincent, real name Annie Clark.

"I’m completely in love. Before, I didn’t know what love was - real love. I didn’t understand the depth of it. I always used to think it was you against the world."

She added: "Now I know the meaning of life is love. Whether that’s for yourself or for the world or your partner.”