Director Rachel Griffiths has compared protesters who picketed the premiere of her biopic about jockey Michelle Payne to "militant vegans" — despite lead actor Teresa Palmer being a vegan who has raised concerns about horse racing. 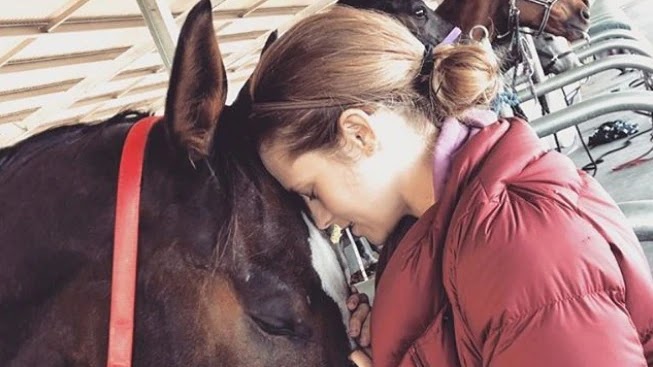 Palmer, who has repeatedly expressed strong support for animal rights and condemned the mistreatment of horses, plays the role of Payne in Griffiths' new film Ride Like a Girl which received its world premiere on Sunday.

On November 3, 2015, Payne rode into the record books when she became the first female jockey in history to win the Melbourne Cup, crossing the line on Prince of Penzance.

However, on the same day as that result, Palmer tweeted: "Important to remember the welfare of the horses! #melbournecup."

The Adelaide actress is a horse lover and has shared several photos of herself with horses on Instagram.

She is also a well-known vegan and has previously spoken out against animal cruelty.

In 2016, she tweeted about the mistreatment of carriage horses in New York.

The film Ride Like a Girl has received praise from critics but has also been the target of animal rights activists, who disrupted its premiere in Melbourne.

The film's screening was later disrupted by protesters who were then evicted from the cinema.

On Monday, Griffiths likened the protesters to "militant vegans" and repeated that criticism on ABC Radio Adelaide on Thursday morning.

She also downplayed the disruption caused by Sunday's protest, describing it as "very minor".

"I did compare it a bit too militant vegans turning up at the botanical gardens on Christmas Day and yelling at people for enjoying their ham," she said.

"I'm quite famous for my own history of protesting, and I think as good citizens at different times in history we must and need to make our voices heard, but I think one can be strategic about it."

In 1997, Griffiths famously bared her breasts to protest against the opening of Melbourne's Crown casino.

However, Racing Australia has previously committed to driving down the number of horse deaths.

"One death is one too many, but we need to understand that over the past year, almost 182,000 horses got a start in more than 19,000 races across Australia and that our fatality rate is far lower than for countries like Britain," the chief executive Barry O'Farrell said in August.

"The industry invests hundreds of thousands of dollars into research, it invests into facilities including tracks and fencing, but it also provides supervisory staff like vets at every race meeting to try and avoid these sorts of accidents and any deaths."