Actress Scarlett Johansson said Friday that she's aware of the recent news of Park Geun-Hye, the South Korean president who was recently ousted over an explosive political scandal and joked about wanting to slip into the presidential office to learn more of it.

"I'm aware that the (South Korean) president was impeached. I've been reading about it in the news in the U.S.," Johansson said at a press conference at the Grand InterContinental Hotel in southern Seoul. 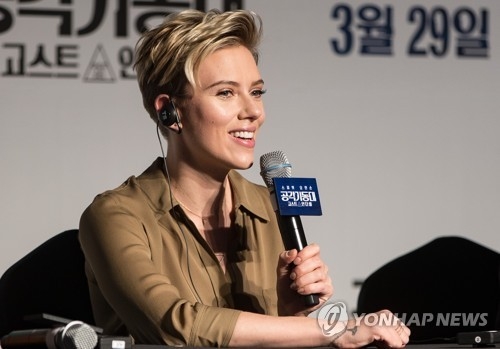 Johansson arrived in South Korea earlier in the day to promote her new science fiction film "Ghost in the Shell," a live-action remake of an iconic 1995 Japanese animation film of the same name. She was responding to a question on whether she knew about Park's removal from office last week by the Constitutional Court.

South Korea's highest court ruled last week that Park, who was impeached by parliament late last year over a political scandal involving her long-time confidante Choi Soon-Sil, was unfit to serve as president and removed her from office.

"It's a very complicated situation it seems," Johansson, who stopped short of commenting further "in order to save face" and "not drag herself into Korean politics."

But later Johansson said, "I would slip into the Blue House (presidential residence) to aptly answer your question," adding to her earlier comments regarding Park's ousting when asked what she would like to do if she can turn invisible, a key capability of her character "The Major" in the film.

When asked about her views on U.S. President Donald Trump, Johansson answered "you want to talk about Trump, I've got plenty to say about that," but stopped short of commenting more.

The original 1995 "Ghost in the Shell," directed by Mamoru Oshii, was a critical and commercially successful film with a massive worldwide following. Its influence has resonated in later science fiction and cyberpunk film genres such as "The Matrix" series.

Johansson's character, the Major, is the film's main protagonist. She is basically a robot with a human soul, and the field commander of the fictional law enforcement unit "Section 9," hence requiring the actress to perform a lot in scenes involving action and wire stunts.

"I trained a lot so I could use (a weapon) as efficiently as possible and be able to use as much of (the weapons) in the fights as possible," said Johansson, adding that she received training from actual law enforcement agencies in the U.S.

Ruper Sanders, the film's director, said that he wanted to introduce the "Ghost in the Shell" universe to the wider general audience.

"The movie takes place in a world we've never seen before. Incredible performance is at the center of it. I really feel there's something in here that we haven't seen before," Sanders explained about his new film that boasts an international cast, including France's Juliette Binoche, Denmark's Pilou Asbaek, and Japan's Takeshi Kitano.