If you watch ABC on Thursday nights, you've come accustomed to hearing Taylor Swift's voice. Her song, "Look What You Made Me Do," has been used in commercials for the TGIT line-up to show what Shonda Rhimes has her characters doing this season. Maybe that's why it's not so surprising to hear that Swift will perform a new song during Scandal. Yes, for one night, the singer is joining Olivia Pope's squad with this totally on-brand move. But, that doesn't mean that every Scandal fan is happy about this announcement. Some have even taken to Twitter to write why Swift isn't welcome in ShondaLand, but the fact that she's going to perform during Scandal isn't as obnoxious as people seem to think. 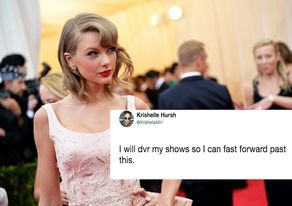 According to ABC, Swift will perform during the Nov. 9 episode of Scandal. The date is an important one for Swift because it also happens to be the night before she drops her sixth album, Reputation. The special performance will air during a commercial break of the show with an extended version of Swift's Scandal performance airing the following night on Freeform. It will be the first time in three years that Swift has performed a new song live.

The Scandal Twitter account teased the "world premiere performance" of Swift's new song with a short clip that includes waves crashing, seagulls clucking, and a piano playing. Oh, and the tweet also included the hashtag, #TGITaylor — which is almost too perfect or extremely annoying, depending on who you ask.

Fans of their Shonda-filled Thursday night were quick to respond to this tweet with their own feelings about Swift's performance. "I will dvr my shows so I can fast forward past this," one person wrote. Meanwhile, another wrote, "I need to watch my shows without this silly girl." But not all the comments were so bad, as someone else pointed out, "She got haters, but woman is killin' the promotion game. Not a Swiftie — but I ain't mad."

The truth is, you can't help but applaud the way Swift's going all in with the promotion of this album. She is making sure that no one, whether they're a fan of Scandal or football (Swift previewed "...Ready For It?" during an Alabama-Florida State college football game ), forgets that she is releasing an album. Whether you're a Swiftie or not, the way she's completely saturated the market is something to marvel at.

The title of the song Swift will perform next Thursday has yet to be revealed, but it will be a track that no one has heard before, which rules out any of the previous singles she has released in advance of the album. Swift has already revealed four new songs in the weeks before Reputation's release. She released three singles total — "Shake It Off," "Out Of The Woods," and "Welcome To New York" — before her last album, 1989, dropped in 2014.

Besides the record's first single "LWYMMD," Swift released "Glamorous," a love song about current beau Joe Alwyn, which fans are quick to note does reference her old love, Tom Hiddleston. She recently released a video for "...Ready For It?," which features a nude bodysuit that had the internet going a little crazy. On Thursday, Swift announced she's releasing a song called "Call It What You Want" at midnight, a week before she drops another new song during her Scandal performance.

Next week, fans will get to see what this "new" Taylor Swift is like live —remember, she already told us the old Taylor can't come to the phone right now because she's dead. But November 9 won't just be a big night for Swift, it will also be a big night for one of her favorite shows. Swift's performance will air after the 300th episode of Grey’s Anatomy.

As most fans and cat lovers already know, Swift's cat is named after Ellen Pompeo's character, Meredith Grey. Back in 2011, Swift explained to Us Weekly why her Scottish Fold was named Meredith. "Because she's a gray cat," she said, "and because I love Grey's Anatomy!" Grey's Anatomy seems to have a lot of affection for Swift, too. When ABC dropped the Swift-infused TGIT promo back in August, the Grey's Anatomy Twitter account wrote, “We’ve got a #reputation. The countdown to TGIT has begun. #LookWhatYouMadeMeDo #TGITaylor.”

Clearly, Swift fits into the world Rhimes has created pretty seamlessly. So the fact that she'll be debuting a new song in the middle of ShondaLand Thursdays isn't obnoxious; it's smart marketing all around.