The new film Bombshell, which recently snagged two Golden Globe and four SAG Awards nominations, tells the true story of the sexual harassment scandal that took down Roger Ailes, the head of Fox News and a kingmaker in the Republican party. Ailes was an imposing personality: He advised right-leaning politicians, including Richard Nixon and Donald Trump, and was said to employ fear tactics in running his business. Ex-employees have said he installed secret surveillance cameras around Fox News offices.

In 2016, a sexual harassment lawsuit brought against Ailes by former Fox journalist Gretchen Carlson kickstarted an internal investigation at the news network and, eventually, a wave of sexual harassment claims against Ailes. Megyn Kelly, at the time the rising star at the network, was among the women to report experiencing harassment at the hands of the network head. In total, more than 20 women accused Ailes, and he was forced to resign from his position in July of that year. He died a year later, at 77. 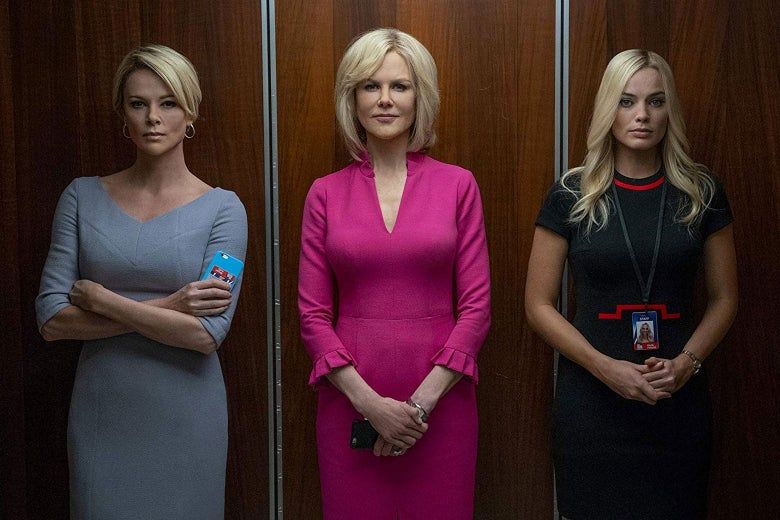 In Bombshell, which opens nationwide on Dec. 20, Nicole Kidman plays Carlson, who, after filing her suit, largely watches and waits on the sidelines hoping that other women at Fox will bolster her credibility with their own claims. Charlize Theron plays Kelly, debating whether to risk the future of her career by coming forward with her own story. And Margot Robbie plays a fictional character named Kayla who hopes to one day be a Fox TV anchor but faces harassment at the hands of Ailes (John Lithgow) and a culture of misogyny at the network.

The film, which is directed by Jay Roach (Trumbo, Meet the Parents) and moves at a clip like The Big Short (with which it shares a screenwriter) has a star-studded ensemble cast: Allison Janney, Connie Britton, and Kate McKinnon all show up in supporting roles. Here’s the story of the real-life scandal that inspired the movie.

Roger Ailes fundamentally changed the television landscape. Earlier in his career, Ailes became a much sought-after republican political consultant—he has been credited with helping both Ronald Reagan and George H.W. Bush get elected. He later moved into television, where in the 1990s he ushered a struggling CNBC into the black.

In 1996, Rupert Murdoch (played in the film by Malcolm McDowell), who was at the time the chairman and CEO of NewsCorp, hired Ailes to launch Fox News. Ailes hired and mentored pugnacious right-wing commentators like Bill O’Reilly and Sean Hannity, whose opinion-forward shows grew to dominate the news network.

During Ailes’ tenure, Fox News cast doubt on where Barack Obama was born and accused corporations of “waging a war on Christmas,” among other inflammatory comments. Notoriously, Ailes hand-picked blonde, skinny women for on-camera shows and—as depicted in Bombshell—demanded that their desks be see-through so that the audience could see their legs. (Women at Fox have also said they were encouraged to wear skirts instead of pants for the same reason.)

Ailes was said to have the ear of powerful politicians and presidents. Long before he declared his candidacy, Donald Trump was a frequent guest. Trump’s call-ins only ramped up once his campaign began. By regularly giving him a platform on his network, Ailes played an essential role in the president’s election.

Fox captured a right-leaning, older demographic that Ailes argued was underserved by the rest of the media. By the time Ailes left Fox News in 2016, the network was averaging 2 million viewers a day, according to the New York Times, more than CNN and MSNBC combined.

Gretchen Carlson and others accused Roger Ailes of sexual harassment

In 2014 then-New York Magazine writer Gabriel Sherman published a biography of Roger Ailes called The Loudest Voice in the Room. In the book, an unnamed female producer alleged that Ailes, while he was at NBC, had offered her an additional $100 per week if she agreed to “have sex with me whenever I want.”

In 2016, former Fox & Friends cohost Gretchen Carlson accused Ailes of “severe and persistent sexual harassment” and of tanking her career by docking her pay and, as shown in the movie, moving her shows to lower-profile time slots after she refused his advances. Carlson said in her suit that when she confronted the Fox News head about his treatment of her, he responded, “I think you and I should have had a sexual relationship a long time ago and then you’d be good and better and I’d be good and better.” Eventually, she was fired.

Ailes denied the accusations and claimed that he let go of Carlson because of her show’s poor ratings.

When Carlson took her job at Fox News, she signed a non-disclosure agreement and a mandatory arbitration agreement that barred her from talking about her experiences publicly and forced her to take legal disputes into arbitration rather than to open court. In a TIME cover story, Carlson spoke about how corporations strategically deploy NDAs and mandatory arbitration clauses to cover up rampant sexual harassment. Even when women risk professional consequences by coming forward with claims of abuse, these legal maneuvers ensure that bad behavior will remain a secret, allowing perpetrators to remain in power.

As more women came forward with sexual harassment claims against Ailes, O’Reilly and other powerful men at Fox News, it became clear that dozens of women had experienced misogyny and worse at the network. Fox News, for instance, had agreed to settle a sexual harassment suit against O’Reilly for a whopping $32 million—and then decided to renew his contract. Ailes fought to protect himself and other powerful men at the network while women who worked there had little recourse for their mistreatment. 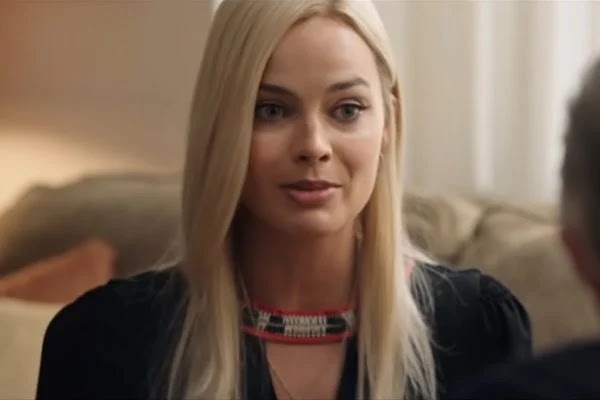 Lachlan and James Murdoch greenlit the internal investigation of Ailes

There was no love lost between Ailes and Rupert Murdoch’s sons, Lachlan and James (played by real-life brothers Ben Lawson and Josh Lawson in the movie). Lachlan had clashed with Ailes on Fox News content in 2005 and left for Australia when his father sided with Ailes. And after a company shake-up in 2015, Ailes was reportedly unhappy about the fact that he was forced to report to Lachlan and James rather than Rupert himself.

Since then, James had become the CEO of 21st Century Fox, and Lachlan executive co-chairman of Fox. The brothers were attending the Sun Valley Conference, an annual gathering of the rich and powerful when the news of Carlson’s suit broke. With their father absent, the brothers consulted in-house counsel and decided to conduct an internal investigation into the sexual harassment claims. They hired the firm Paul, Weiss to conduct the investigation.

Commentators have speculated on the sons’ motivation for this decision—perhaps they still felt burned from a phone-hacking scandal in Britain that had blown up in Rupert Murdoch’s face. Perhaps they wanted to get out in front of another scandal. Perhaps they knew that an investigation into Ailes would turn up dirt: His boorish and sexist behavior at the company was notorious. Perhaps they saw an opportunity to dispatch with one of their greatest rivals in the company.

After news of the suit broke, Ailes solicited help from former New York mayor Rudy Giuliani (played by Richard Kind), who was then acting as a legal consultant. (Ailes had acted as Guiliani’s media advisor during his 1989 mayoral campaign, and Giuliani, in turn, had officiated Ailes’ third wedding.) Giuliani became Ailes’ representative during the internal investigation.

In a strange turn of events, feminist legal scholar Susan Estrich (played by Allison Janney) also joined Roger Ailes’ legal team. Estrich had revolutionized the legal system’s approach to rape cases: She criticized the fact that “acquaintance rape”—rape by a friend or spouse—was considered less extreme than other types of rape and lambasted the courts and the media for treating survivors as “nuts and sluts.” But Estrich was a longtime personal friend of Ailes and often appeared as a talking head on Fox News, usually arguing the liberal side of a day’s given debate.

The week the lawsuit dropped, Roger Ailes’ wife, Beth Ailes (played in Bombshell by Connie Britton) contacted Kimberly Guilfoyle, a Fox News co-host, to help marshal support at the network for the Fox News head, according to Vanity Fair. In the movie, Guilfoyle (now Donald Trump Jr.’s girlfriend) is portrayed distributing pro-Ailes t-shirts, demanding that women around the office put them on. (She reportedly left Fox herself in 2018 after allegations of sexual misconduct, which she subsequently denied, were made against her.)

Other women at Fox spoke out on Ailes’ behalf, including Greta Van Susteren (Anne Ramsay) and Jeanine Pirro (Alanna Ubach), who both hosted their own shows on the network. In the movie we see Pirro confront Kelly at the snack machine, though this is likely fictionalized.

Megyn Kelly, meanwhile, remained conspicuously silent, as depicted in the movie. Beth Ailes also reached out to Kelly, but Kelly claimed she could not speak out about the situation until the investigation was over.

Both the Margot Robbie character and Kate McKinnon character are fictional

In the film, Megyn Kelly debates whether she should come forward about her experience. Her harassment occurred 10 years prior to Carlson’s lawsuit, and she wonders if Ailes could still be harassing women at Fox. In order to find out if that’s the case, she visits a young aspiring anchor named Kayla, played by Margot Robbie, who reveals to her in confidence that Ailes is, indeed, harassing her. The audience even sees a brief but disturbing scene in which Ailes asks Kayla to prove her loyalty to him by hiking up her skirt so he can see her underwear.

Kayla is a fictional character—as is Jess (Kate McKinnon), Kayla’s coworker and confidant who refuses to get involved in the matter for fear that someone at the network will find out that she is gay and fire her. But the younger journalists are included in the story to show how the reign of terror affected the women who were less powerful than Megyn Kelly and other anchors at Fox, and how they were forced to decide between their blossoming careers and stepping forward to protect themselves and their colleagues.