Dakota Fanning may not have realized it when she signed on to star in Netflix’s Victorian detective series The Alienist (streaming today), but the show has pretty directly tapped into the zeitgeist of #MeToo and #TimesUp.

Fanning plays New York’s first policewoman Sara Howard (the character isn’t real, but she is based on a real person), who has to put up with sexual harassment and abuse of power on a daily basis, as she aids criminal psychologist Dr. Laszlo Kreizler (Daniel Brühl) and newspaper illustrator John Moore (Luke Evans) as the trio tries to solve a series of murders.

But how does it feel to be living through the era of #MeToo and #TimesUp, a time in history that’ll be discussed for decades? 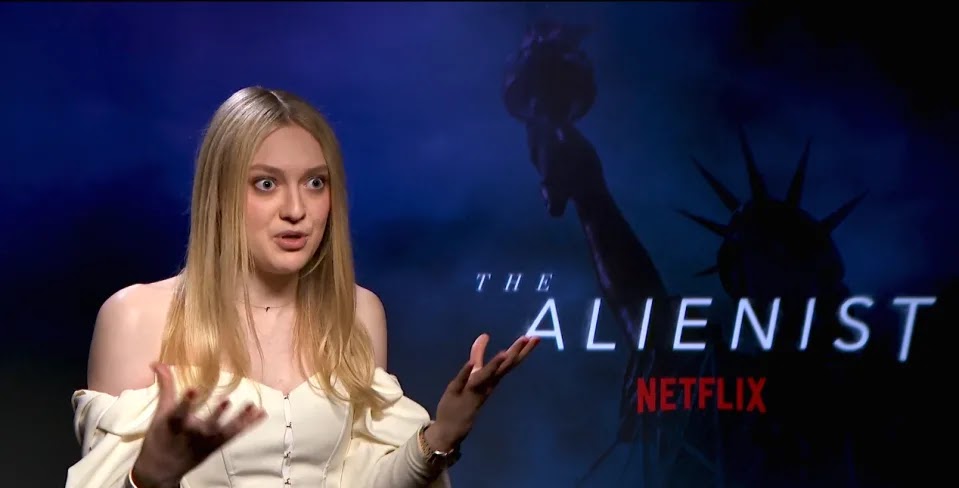 “I think it’s exciting,” Fanning says. “It’s an exciting time for men and women to learn things about one another, and to hear stories and really listen to them, and have those stories be out there in the world and help to create change. That’s what we’re seeing happening.”

“I think that I’ve been very lucky in my experiences as an actor, I’m very grateful that I don’t feel that I have an experience that compares to some of the stories, or Sara’s story, I’ve worked with people that I’ve felt respected by.”

“But it has been a coincidence that Sara’s story has coincided with this exploding conversation that’s been happening. I think it’s really important to acknowledge that this is not something that just happens in the entertainment industry, it’s happening in all industries and it has for a very long time.”

“That’s what The Alienist and Sara’s story is really showing to my generation in particular. I’m 24 and I think a lot of 24-year-olds aren’t thinking about 1896, and thinking that’s so long ago, but really it’s actually not. Even though I wish that the same things weren’t happening and that we had progressed more from 1896, I hope that Sara’s story and the series, in general, can create positive conversation for these modern situations.”

“Examination of the past is the way you change the future. That’s resonated in the States with people who’ve watched [The Alienist], and I hope that when it comes out on Netflix that continues, and its relevance is turned into a positive rather than a negative thing.”

One of the men who contribute to Sara’s situation (even if he thinks he’s doing the right thing) is Luke Evans’ John Moore, a drunken dandy who tries to help Sara – by either talking over or trying to speak for the police officer.

How does Evans feel his character reflects modern society? “You have to remember, this is 1896, life was very different at that time. Dakota plays the first female in the New York police department, which in itself is a huge thing for 1896. She’s confronted with harassment at work and all those kinds of things, but in John Moore’s defense, I must say that he thinks he’s doing the right thing. He’s a traditional old-fashioned fashioned gentleman.”

“So when he interrupts to say ‘Gentlemen, we can’t talk about this, there’s a lady present!’ he’s only doing what his grandmother has taught him to do. That was the moment in history when men did those things, they didn’t necessarily do them to suppress a woman’s voice or to shut them up, because I don’t think John Moore wants her to be quiet, he’s just thinking he’s doing the right thing.”

“Through ten episodes he realizes that she’s not one to be trifled with, and you don’t speak for Sara Howard, Sara Howard speaks for herself, and in a way, it’s quite sexy. He really falls for her it in a massive way, and respects her for it.”

But does Evans think that, rather than speaking on behalf of women, men should amplify their voices as much as possible? “Yeah, I totally agree. I have a life full of women who speak way louder than myself, I don’t have any worries about that in my life. Very strong woman, who I admire and respect. I’ve always been around strong feminists, and that’s always been an education for me. We’ve come a long way, but we still have a long, long way to go.”