She's achieved more in her 21 years than many actors can hope for in their entire lifetime.

But Hailee Steinfeld has opened up about her struggles with matters of the heart in a revealing interview and stunning cover shoot with the February issue of Marie Claire magazine.

The actress and singer, 21, admitted she has a guard up when it comes to romance, but she is keen to 'fall in love and experience the highs and lows of a proper, adult relationship. 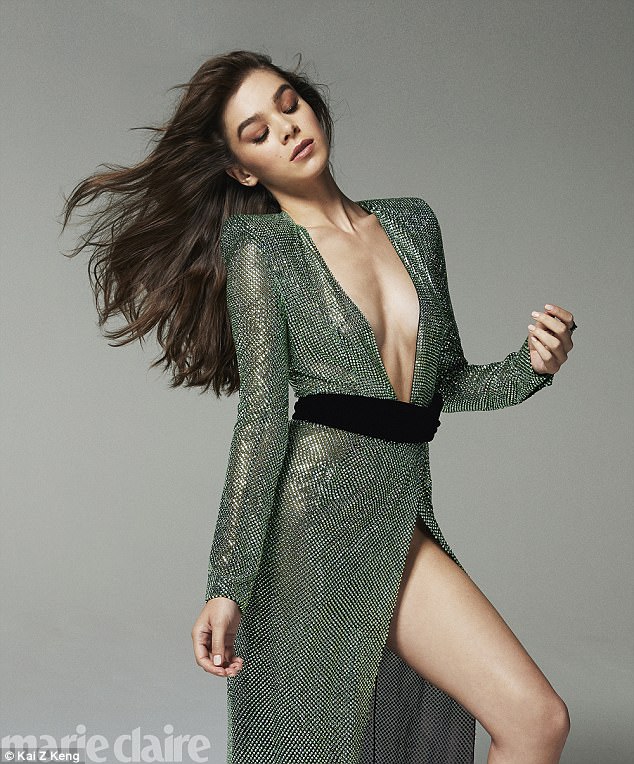 The Pitch Perfect 3 star dazzled in a striking shoot to accompany the tell-all chat, turning heads in a plunging emerald green Alexandre Vauthier gown with a soaring thigh-high split.

Another high-fashion shot saw the Academy Award-nominated actress smolder in a Ralph & Russo wrap dress with cutaways. She rounded off the spread in a silver ruffle-detail Balmain number.

Hailee shot to fame when she was 14, making her Hollywood breakthrough in 2010's True Grit, for which she received an Oscar nod for Best Supporting Actress.

She has since gone on to enjoy critical acclaim for numerous roles, including coming-of-age comedy-drama The Edge Of Seventeen.

But Hailee admitted being a child star was not easy, with multiple people in the industry trying to steer her in 'a certain direction' during the early ages of her career.

Asked what advice she'd give her younger self, she explained: 'Listen to yourself. So many people will try and steer you in a certain direction - not saying that that’s the wrong direction at all - but you have to know what’s right for you.

In more recent years, the actress has branched out into the world of music, achieving two platinum-selling records with 2015's Love Myself and 2016's Starving.

Hailee explained she feels more vulnerable as a musician, as she is not 'masked by characters in the same way as when she is acting.

She told Marie Claire: 'As an actor, I’m masked by characters, protected by them. But as a musician, it’s my story, my voice, my face.

'It’s me on that stage talking about that horrible experience I went through and [saying,] "Here, I’m going to sing about it." It’s such a different kind of vulnerability.

'To connect with fans, there’s pressure in feeling like I have to do things that I’m uncomfortable with, in terms of opening up enough about myself.'

Rounding off the interview, Hailee detailed her desire to use her platform for good, saying: '

I’ve worked hard and gotten to a place where I have a voice: How can I use it? What can I, as a human and artist, do?'