She became a newlywed again last month after tying the knot with Jack Donnelly.

And Malin Akerman appeared to be still enjoying the honeymoon phase, stepping out with her man for the InStyle and Warner Bros Golden Globes after party at the Beverly Hilton Hotel in California.

The Billions star, 40, looked red hot in a plunging asymmetric frock adorned with glittering ruby sequins as she worked the grey carpet with her British actor beau, 32

The blonde beauty styled her platinum bum into a disheveled bun and added a pretty pair of double-hoop earrings to complete her ensemble. 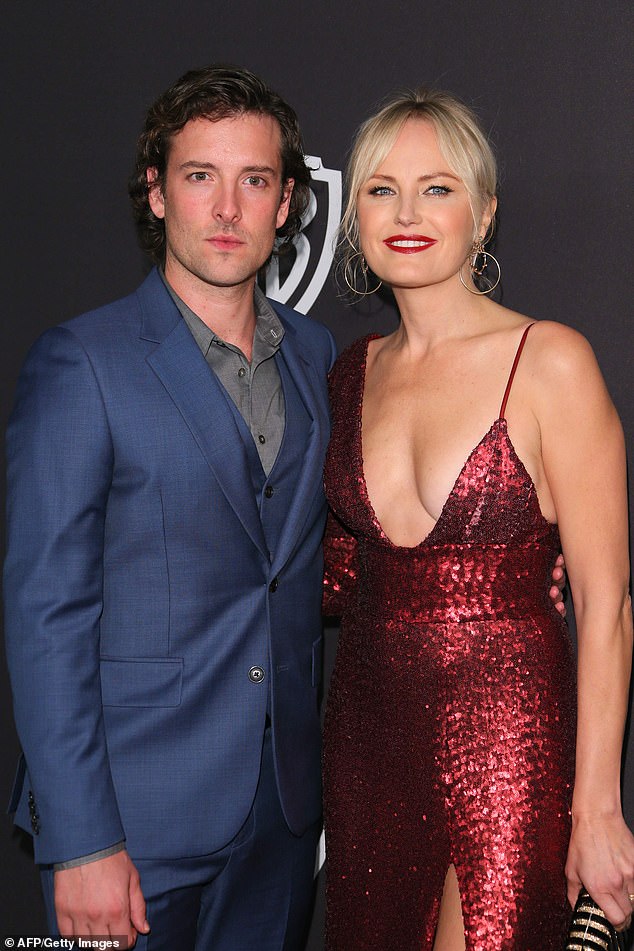 Malin opted for a flawless make-up look, complete with a bold pillar-box-red lip. A metallic gold manicure and pedicure finished off her glamorous appearance.

The 27 dresses actress showcased her trim physique while posing alongside her fiancé, Atlantis star Jack.

The actor looked dapper in a light blue three-piece suit, which he teamed with an open-neck khaki shirt.

The newlyweds made their way to Amazon Prime Video's Golden Globes Awards bash following her turn at the InStyle after-party.

Malin and Jack tied the knot at a private resort in Tulum on Dec 1 - after first being linked together in March.

She announced her engagement to the 32-year-old in October via Instagram.

'It just feels like the last piece of the puzzle clicked and it feels right,' she explained to UsWeekly at an event a week ago.

Sebastian had a big role to play at her nuptials, with UsWeekly reporting he sang a special song to his mom and new stepdad at the dinner the night before the couple exchanged vows.

Malin has previously stated that her son and her new husband get on well and are 'inseparable.'

'It makes my heart warm. I’m very glad to be bringing Jack into our lives for good,' she told Us Weekly.

The Swedish-American star was previously married to Zincone from 2007 to 2014.