The former Neighbours actress has championed gender equality when it comes to nudity for years and posted countless topless selfies on her Instagram account in that time.

She even has a track record of photographing her pubic hair and posing naked on dating apps.

But her latest effort was decidedly more bizarre and looks to have backfired. 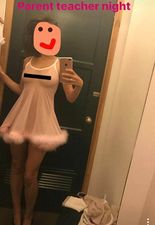 Caitlin posed in a totally transparent nightgown that brazenly displayed her nipples, but decided to draw over her face.

She captioned the shot "Parent-teacher night," which we can only hope was a joke.

If not, we imagine she ruffled plenty of feathers, not to mention set a few pulses racing, at her local school.

Standing by her front door, the vixen seductively extended one leg while posing in the mirror.

However, just hours later she took the post down – a sign that she either thought better of the stunt or received some kind of warning from the nudity police. 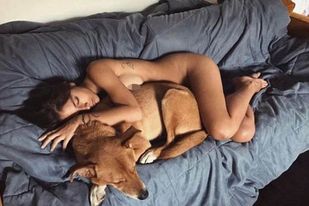 The move comes after Caitlin fiercely hit out at her critics and launched a crusade against 'slut shaming'.

"The world is filled to the brim with countless ills and sadnesses. I'm lucky. Loved. Supported. Healthy. Happy. I hope you are too. I'm sorry if you aren't," she went on.

"I don't think clogging my comments with your frustration will change that. But what do I know? I'm a dumb sl*t with no self-respect."