So, guys, what if we killed Cyrus Beene?

It’s an idea, right? And in this final stretch of the scandalous Scandal, it seems to be the most likely choice, but alas, the ability to complete the deed is getting harder and harder for our team. Is it because Cyrus is a speedy dude who can dodge bullets? No. It’s because, after a couple seasons of some complicated storytelling, it seems that Scandal is getting itself aligned just in time. We find ourselves rallying behind Mellie, who has done plenty to warrant the support, but is it too late? Will Mellie be the ultimately sacrificial lamb or the center of a hurricane that is finally calming down?

Underneath the White House, Mellie is asking Olivia if she’ll kill Cyrus, and Olivia is like, “Ah, no! I can’t kill people!” and all I can think is there is a metal chair out there that says otherwise. But as Olivia defends herself, Mellie argues that this is the time for women, and Cyrus is simply trying to take it away from them. Meanwhile, Cyrus is taking his silly spiky hair and planning to take Mellie down with Jake’s assistance. Mellie knows what’s up though, and she’s eliminating essentially all communication between her and anyone else other than Olivia Pope. And it’s for good reason because Lonnie is up there in front of America saying that Mellie is a person of interest in the hijacking case.

Vanessa tries to talk to Jake about all the insanity at the White House, and all Jake can say is that they’re going to be fine. Imagine being poor Vanessa, staying perpetually wine-drunk and just hoping that you’ll live to see tomorrow and your sex robot of a husband just says in a monotone voice every morning that it’s all going to be ok. Poor Vanessa. But Jake has a point because he’s working one-on-one with Cyrus, who seems to be in control. Of course, that is until he’s summoned to meet with Lonnie. When he gets to the meeting place though, it’s Olivia and Huck who are waiting on him, and Olivia is wearing a FIRE blazer, so you know she means business.

As this is happening, Mellie is essentially being put on trial in front of the American people. Marcus eventually joins her, and Mellie confides in him and tries to explain that Olivia is handling her framing, but when Marcus questions her, she simply has him shown out because of Mellie. Is. Taking. Charge. Speaking of taking charge, Olivia is downstairs chatting with Cyrus and letting him know (with the grip of a metal chair) that there is a couple option: confess or she’ll make it happen herself. But he’s not interested in folding either, so Cy and Liv are at a stalemate and set up a long-term shop until one of them backs down. 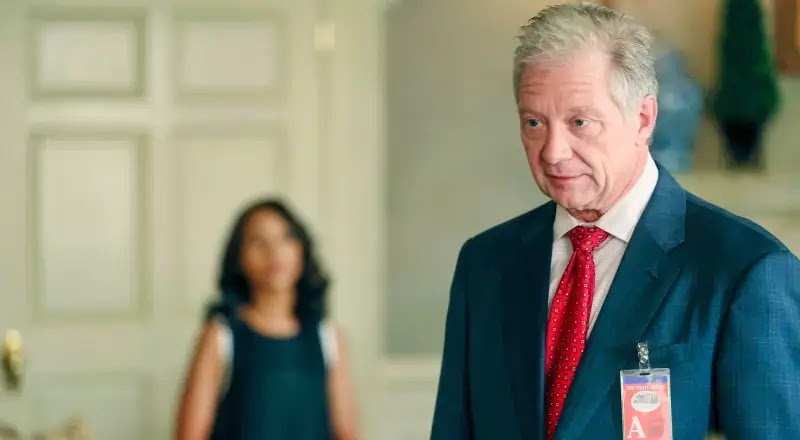 At QPA, Quinn and Abby go full tech gurus and start to hack into Cyrus’ phone. Yes, Abby. The girl is ready to step into the hacking skill set she desperately needs. Come to think of it, everyone is rallying behind Mellie (well, except Cyrus, but you knew that). Marcus confides in Fitz to help defend their girl, and God knows she could use it. She’s in the Oval getting a little messy as she discusses Karen’s love life. It looks like she’s going insane, but it turns out that she’s actually speaking directly to Jake via NSA camera. It’s kind of perfect because it’s finally Mellie’s moment to make good on the fact that Jake has been nothing but a pawn this entire time, and Mellie makes it clear to him: “We’re coming for you.”

Outside of the Cyrus and Olivia stake out, Huck confronts Olivia because she ordered three bottles of wine (which sounds like a party, hayyyy). She’s got two bottles of her favorite and one that’s not. It’s a convenient way to remember which one she poisoned when she serves Cyrus his glass. Of course, Huck calls her out because he just got his Olivia back. I’m with you, Huck. Girl has GOT TO stop killing people. So she goes back into the room and starts chatting with Cyrus about his daughter Ella. Cyrus shuts it down and brings up Fitz instead. He asks Olivia what she thinks would have happened if she’d never met him. Cyrus, through laughter, says that he would be the exact same, but Olivia? Well, it’s up for debate… does Fitz make Olivia a better or a worse person? For Cyrus? He does nothing because Cyrus will always be Cyrus. It’s enough to convince her not to poison Cy. (Recap continues on next page)

Back with Abby and Quinn, they discover that the hacker in Cyrus’ phone is LilPymp69. Y’all, you can’t make this up. But turns out that the hacker, aka LilPymp69, is dead. Cyrus had him killed to help cover up that hijacking. So Olivia turns back to her darkness: The idea is to kill Cyrus with the cyanide wine. All clues will point to Lonnie, and he’ll go down for killing Cyrus. Huck is devastated, but Olivia is insistent. Back in the Oval, Mellie calls Fitz because even with all the bluffs she’s calling, she’s lonely. She needs advice and support, and Fitz is there to give it. She tells Mellie that she has to find another way around this mess. She can’t lose her soul, and Fitz affirms it: She’s better than him. She’s better than everyone.

Back in the room of guilt, Olivia seems to pour both him and Olivia a glass of that poison wine, and I audibly gasp. What if Olivia killed herself!? I can’t even. But before she passes the glass over, she tells Cyrus that not being able to change is insulting. Right at that moment, Jake bursts in and stops Olivia, and bails Cyrus out. Olivia tries to force Cyrus to take the glass, but Jake takes the glass and sets it aside, replacing it with a gun. He then puts the barrel in his mouth and tells Olivia to pull the trigger, but she can’t. That’s when Jake launches into a speech and says that Olivia has to have people like him because she can’t get the job done on her own, and you know what? That’s not a bad thing!

Jake gets home and chats with Lonnie about the situation at hand, but Vanessa walks in with wine in hand and calls Jake out. Vanessa is in a mood, y’all. She tells Jake that he’s just the vice president’s bitch, and she’s just the wife of the vice president’s bitch. Preach, queen. Meanwhile, Olivia heads to Mellie to tell her that she couldn’t do the job, but that’s okay because that’s not who either of them is. So Olivia says that she’s with Mellie, always. And Mellie says the same. So Olivia says that they just need to figure out how to surf the tsunami, so Mellie leans in. All the way. Head on. And addresses the rumors herself to say that she knows she’s been subpoenaed, and she knows that she’s been targeted, but she’s not going to back down because she’s innocent. Mellie is wearing the White Hat in the White House, y’all. She is Not. Guilty.

The night ends with Olivia paying a quick visit to Fitz. She delivers a bottle of whiskey to him, to cheers to the old days. As he tries to flirt with him, she goes in for a TV kiss. A TV kiss is the unrealistic kind of kiss that would cause normal people to chip a tooth but somehow works when you do it on television. But while the kissing happens, Cyrus makes a visit himself. When he shows up at Jake’s house, Jake is out of breath, but it’s okay. Jake has everything handled (oh God, maybe Vanessa, too?). He’s implicated Olivia in both the hijacking and the assassination of President Rashad. Cyrus tells him he wasn’t authorized to do that, but Jake just leads him to the kitchen instead and pours him a glass of whiskey. And then he tells Cyrus that they’re a partnership like he and Vanessa were (oh God). But he handled Vanessa, and he dissolved their partnership. He’d hate to dissolve theirs. We pan to an image of Vanessa dead on the floor as Cyrus says, “We should get someone to clean up this mess, partner.”