Gossip Girl was beloved by fans for its incredible style, with outfits that viewers worshipped, picked over, and even recreated themselves.

But somehow, despite millions of fans doting on Serena, Blair, and the gang's every fashion choice, a glaring wardrobe malfunction was overlooked — until now.

During a recent re-watch of the show, TikTok user @skyehanamaikai noticed a pretty shocking on-screen mishap, which might just put a dent in Serena van der Woodsen's trend-setter cred. 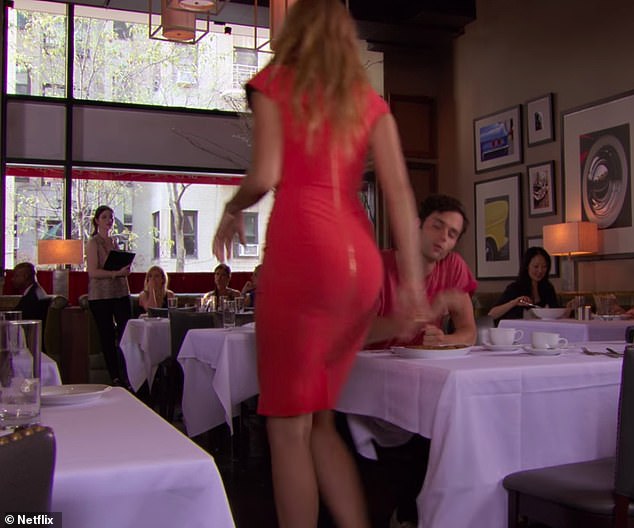 In the episode, Serena, who is played by Blake Lively, is dressed in a coral-colored Roland Mouret bodycon dress, which she wore — naturally — with bare legs and platform pumps.

There are a few full-length shots of her both sitting and standing, first in a scene with her boyfriend Steven Spence and then in a restaurant with Dan Humphrey.

'She looks great. There it is again. She looks good,' TikTok user @skyehanamaikai narrates the scene, which she is playing on her laptop.

But at the end of the scene, as Serena gets up to go, a three-second shot very clearly shows her wearing a pair of black drawstring sweatpants pulled up over her legs and the hem of her dress.

It's not on screen for long, so for years the glaring wardrobe snafu went unnoticed by most fans of the show.

Now, though, thanks to the viral TikTok video, fans are freaking out over the mistake.

Since the TikTok was posted on April 24, it's been viewed a whopping 7.3 million times.

'The fact that I've rewatched Gossip Girl 3 times and still didn't notice...' wrote one of thousands of astounding commenters.

In all likelihood, actress Blake Lively was wearing the sweats to keep her legs warm between takes and kept them on for the shot. Those shooting the episode probably didn't notice that they were visible on screen.