In the promos for Captain Marvel, we see Carol Danvers fully suited up with her eyes glowing, her hair aflame and a stance ready to take on the world. It’s a breathtaking moment - but Larson said that, without all the special effects trickery on set, it was actually “so embarrassing” to shoot.

Speaking with YouTuber Janina Vela, Larson was asked if she practiced it in the mirror. 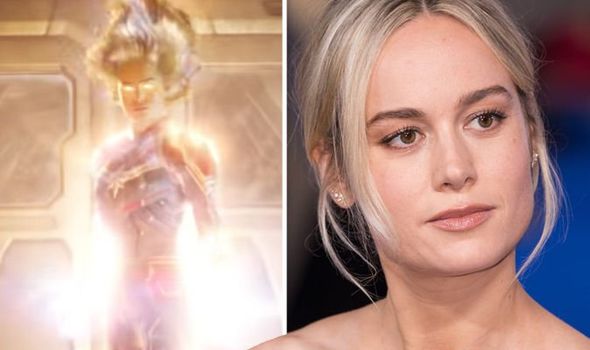 “It’s more awkward than you think. I mean, I couldn’t stop laughing.

“The first couple of weeks, I was like, ‘I feel so silly doing this’.

She added: “That shot where my hair’s all in flames - it looks really cool but in the moment you’re like, ‘oh God, this just feels so embarrassing!’”

Larson’s arrival as Carol Danvers is a huge deal for Marvel: the film is the studio’s first in which a female is the only titular character.

It’s been met with some minor pushback by trolls online, who have interpreted her vocal campaigning for female and BAME film journalists to get more opportunities as “anti-white-men” sentiments.

But she spoke out about the issue herself in another interview with FOX 5 DC.

When the interviewer mentioned that “headlines” have misrepresented her, she said: “It’s hard for me to comment on that because I don’t know what the headlines were or what was said or what I said or what people think I said.”

But she clarified: “All that I know is, what I’m looking for is to bring more seats up to the table. Nobody is getting their chair taken away.