Marvel's first solo foray into television comes in the form of the strange sitcom-superhero hybrid WandaVision.

And star Elizabeth Olsen has compared the experience of making the show to that of her older sisters Mary-Kate and Ashley Olsen, who rose to fame on the classic 90s sitcom Full House, in an interview alongside co-star Paul Bettany, 49, with Entertainment Weekly.

'There was something very meta for my own life because I would visit those tapings as a kid, where my sisters were working [on Full House],' said the Martha Marcy May Marlene star. 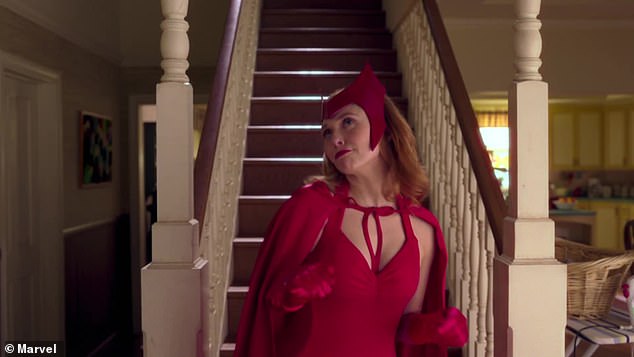 'It was insanity,' said Olsen of her first time making a sitcom of her own, which was filmed in front of a live studio audience to add authenticity.

Her 34-year-old twin sisters shared the role of Michelle Tanner on Full House between 1987 and 1995.

It’s been the biggest gift that Marvel’s given me, getting to do this show,' Elizabeth told the magazine.

'You get to just focus on [her Marvel Cinematic Universe character Wanda Maximoff] and not how she felt through everyone else’s storylines.

And Bettany, who has been part of the MCU since 2008's Iron Man, also appreciated the change in pace from action to genre-bending laughs.

'I thought, God, I’ve ruined my whole life,' Bettany -who plays android Vision- laughed. 'I should have been doing sitcoms all this time.'

The first official trailer for the much-anticipated Disney+ miniseries WandaVision debuted during the virtual 2020 Emmy Awards.

The show will have an initial six episode run that Marvel has described as a 'mega event series'.

Created by Captain Marvel writer Jac Schaeffer, the show centers on the two super-powered beings living an idyllic suburbia life in a world straight out of a 1950s sitcom.

The series has been described as a 'blend of classic television and the Marvel Cinematic Universe in which Wanda Maximoff and Vision begin to suspect that everything is not as it seems.

The series, which has been long awaited by Marvel fans, was also one of the many productions shut down in the wake of the COVID-19 pandemic earlier in the year.

The first look at the upcoming series took place earlier this year, during the Super Bowl in February.

So far there's no official word on an exact release date just yet but it is expected to premiere on Disney+ some time in December 2020.