Margaret Qualley has always been self-conscious about her feet. In ballet classes from age 2, she spent most of her life stuffing them into pointe shoes that left her with what she considers mangled toes. “I hate my feet more than anything on the fucking planet,” she says, tucked into a back table at the Chateau Marmont on a warm October afternoon.

Yet all 10 of those mangled toes were prominently on display this summer, perched on Brad Pitt’s dashboard in a much-discussed barefooted scene in Quentin Tarantino’s Once Upon a Time in Hollywood, a film that turned out to be just one highlight in a breakthrough year for the 25-year-old actress. After a half-decade of solid, steady work in film and television — not to mention one viral perfume commercial — the daughter of actress Andie MacDowell and former Gap model Paul Qualley has notched “It” girl status, even earning her first Emmy nomination this fall for her portrayal of Broadway legend Ann Reinking in the FX limited series Fosse/Verdon. 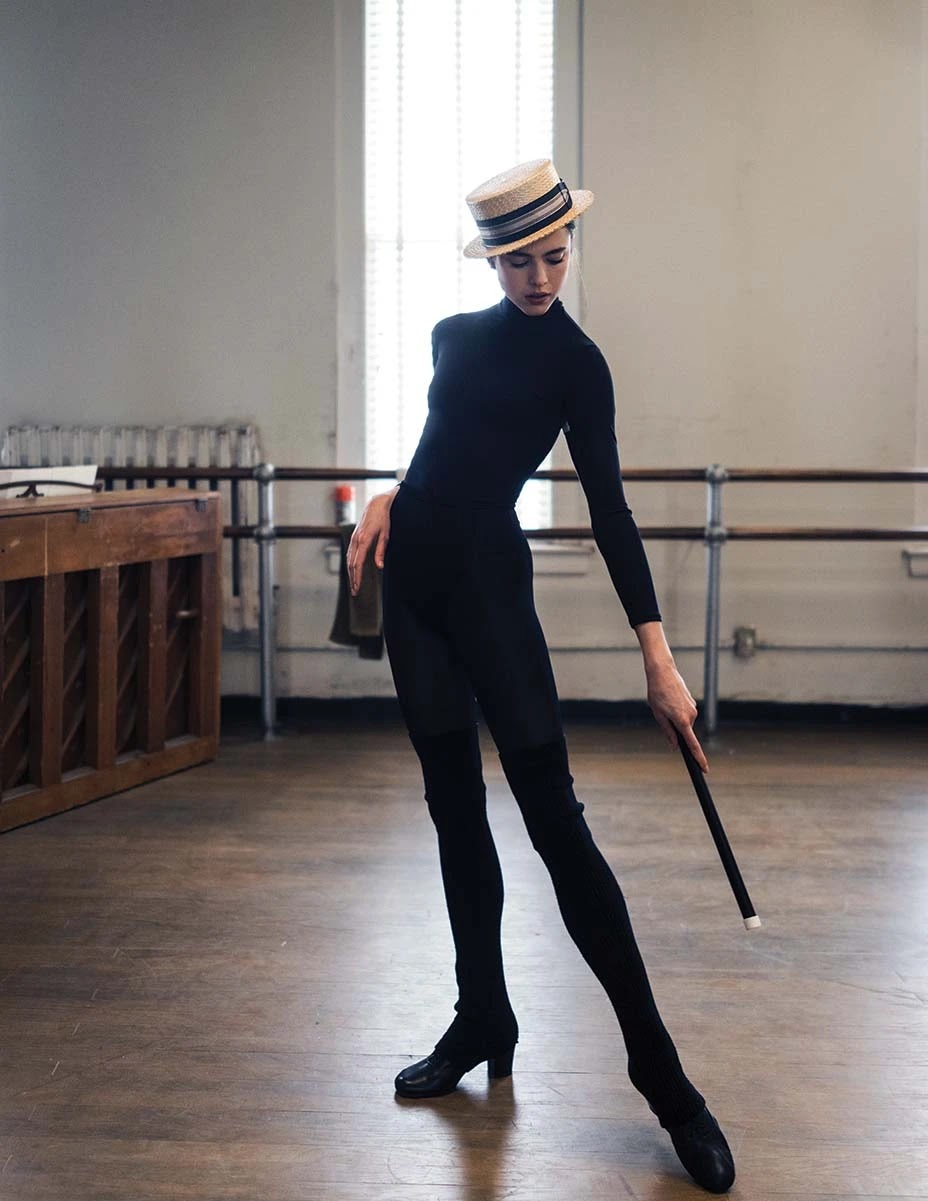 Qualley plans to keep that momentum going with a flurry of high-profile films, including political drama Seberg with Kristen Stewart (opening Dec. 13), thriller The Chain opposite Jamie Bell and Sebastian Stan and My Salinger Year in a starring role as the assistant to J.D. Salinger’s literary agent (portrayed by Sigourney Weaver). She’s playing in plenty of other sandboxes, too, appearing as a character in Hideo Kojima’s video game Death Stranding and becoming the new face of a fashion campaign from French luxury brand Celine. And then there’s the top-secret short film directed by Booksmart‘s Olivia Wilde that she was spotted shooting in Times Square in early October. As a sign of Qualley’s rising profile, Wilde reached out to her directly for the part.

With Qualley more in demand than ever, it’s no surprise when, after scouring the menu and settling on an iced tea, she cops to being exhausted — though she doesn’t look it. “I’ve been to Europe five times in the past two months, most of which were 24-hour in-and-outs,” she explains. “I’m a walking zombie at the moment.” In fact, she just arrived in town late the night before following a whirlwind one-day trip to Paris for a fashion collaboration she’s forbidden to talk about. “I’ve got to be so mysterious now,” she says, rolling her eyes.

Of course, she got a master class in secrecy on Once Upon a Time, unable to tell a soul she was in the Sony movie until the news came out. She cringes when she thinks about the time on set when she whipped out her “embarrassing” feet in front of Tarantino and Pitt, desperately pleading with them to keep them out of the film. “I was like, ‘Guys, look, these are awful,’ ” she recalls telling the pair ahead of the scene. ” ‘Get me a foot double, please.’ “ 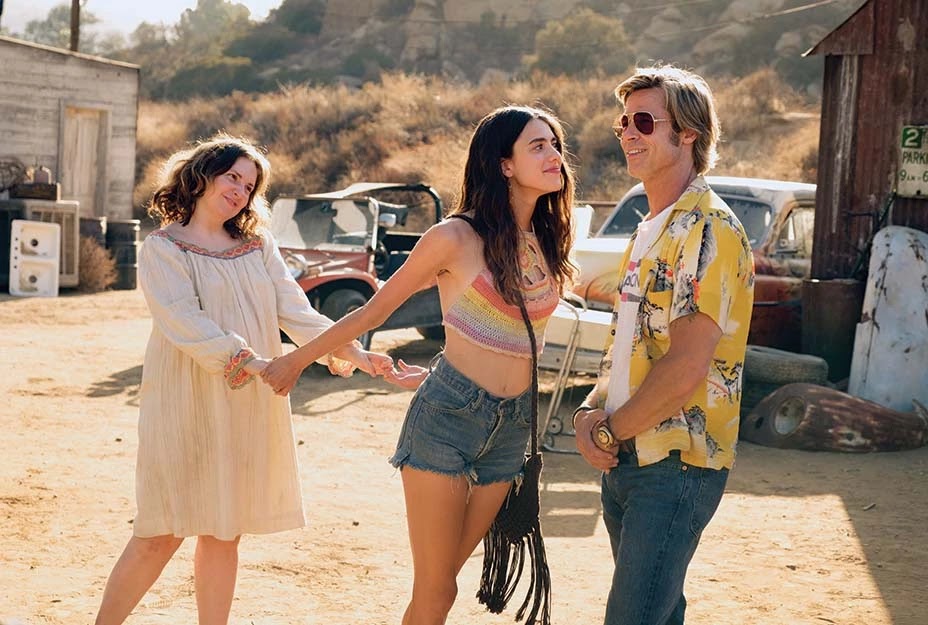 Despite growing up with a famous mom, Qualley says she doesn’t talk shop with MacDowell very often and only recently watched Four Weddings and a Funeral. (“Who wants to watch their mom kissing other dudes? It’s weird.”) Born in Montana and raised in Asheville, North Carolina, there wasn’t anything particularly “Hollywood” about her upbringing, except for when she tried to get her mom and dad to watch The Parent Trap after their divorce in hopes of a reunion — only to instead come home to mom’s new boyfriend, Dennis Quaid, the movie’s star.

Qualley was initially reluctant to have a career in Hollywood. “I didn’t want to act because my mom does that and …” she trails off, searching for the right words to articulate what’s often a sensitive subject for actors with famous parents. “I think people often don’t want to do what their parents did.” Instead, Qualley spent her childhood in ballet classes. At 14, she left for boarding school at the North Carolina School of the Arts, and by 16, she’d landed a coveted spot in the American Ballet Theatre’s summer program in New York. But just when she was offered a prestigious apprenticeship, she decided to quit dancing altogether.

For Qualley, ballet had become about being perfect. “I was the first one there and the last one to leave, but I don’t think it was because I really loved it at that point,” she says. There were also the practically inescapable body-image pressures of the strict ballet world. “You’d go to these check-ins and they’d measure your fat and would send you a letter if you were too big or too small. But, like,” she pauses, “no one is too small.”

Jobless but hellbent on staying in New York, Qualley wrote her mom a carefully crafted email laying out her master plan: She’d signed with modeling agency IMG to earn enough money to stay in the city by herself and planned to enroll in Professional Children’s School, a go-to for kid performers. The good news was that MacDowell bought in. The bad was that Qualley very quickly came up against the same weight-related pressures in modeling that she’d encountered in dance. “I struggled [the most] in the brief interim when I was modeling because with ballet, there was at least so much work. With modeling, it was like, ‘OK, how do I work hard? I guess I get really fucking skinny?’ ” she says. “So I did that and then I was like, ‘Well, I’m miserable and not thinking very clearly, so let’s not keep this up.’ “

She lasted four months. At that point, her then-boyfriend, actor Nat Wolff, encouraged her to go to an improv class with him. Any hesitations she’d had about following in her mom’s footsteps dissipated during that first class. “I was like, ‘Oh, my God, I have so many feelings, and this is all I want to do.’ What have I been thinking?” she recalls. Qualley swiftly enrolled in the Royal Academy of Dramatic Art, London’s premiere drama school, for a summer to study Shakespeare and soon after scored her first onscreen role when she was visiting Wolff on the set of Palo Alto and director Gia Coppola asked if she wanted to be in the movie. “I was just hanging out and she was like, ‘Let’s just make use of you,’ ” says Qualley, who cried in a scene with James Franco.

The next year, she dropped out of NYU after a semester when she was cast as Justin Theroux’s onscreen daughter in HBO’s critically beloved drama series The Leftovers. Looking back, she credits the show with giving her “a crash course in acting” that helped her land her first movie, Shane Black’s The Nice Guys. She still can’t shake the audition for the latter. “I was super terrified for that one because, like, Ryan Gosling,” she says, breaking into nervous laughter. “My heart was racing and I was just like, ‘I can’t handle this. I’ve watched Blue Valentine too many times.’ ”

Glance at Qualley’s résumé, and a pattern starts to emerge. “It’s always me with a cool, famous dude to make me real nervous,” she confesses, acknowledging that Pitt, Theroux, Rockwell and Gosling all fit the bill. Even though she now calls Pitt a “friend,” texts Reinking from time to time and has become a new fixture for the paparazzi (her recent high-profile fling with Saturday Night Live‘s Pete Davidson only added to the fervor), Qualley contends her world hasn’t been flipped upside down. “I’m not cool and I don’t party,” she says, maintaining that she prefers to hang out with family and friends and do “boring things” like read books, go to movies and take dance classes. On this, she’s emphatic: “My life has not changed.”

Keeping Qualley grounded is her close-knit relationship with her family. She’s roommates with her older sister, Rainey, an actress and singer-songwriter who performs under the name Rainsford. Together they alternate between coasts, living in her sister’s Echo Park home when they’re in Los Angeles and in Qualley’s New York apartment when they’re on the East Coast, often quibbling about which city to be in at any given moment. Qualley has even hatched a plan to lure her sister away from California that involves setting her up with a New York man. “I’ve really been pushing Trevor Noah on her, and she likes that idea a lot,” she says.

She’s just as tight with her older brother, Justin, who lives on the family ranch in Montana, even bringing him as her date to the Emmys. And she occasionally hops down to Panama to visit her dad, a contractor who builds houses and lives out of them as he does. “It’s camping, essentially,” she explains. “Growing up, I would go to my dad’s with a sleeping bag and a space heater and would sneak into the YMCA to shower.” When she went to stay with him a couple of years ago, she found herself sleeping outside on a mattress, cooking dinner over a fire, showering with a hose and peeing off the side of a railing. “Now he’s like, ‘OK, Margaret, we have showers. Do you want to come?’ ” says Qualley, who, despite her success, insists she’s still fine with the hose.

She also maintains she’s still the kind of actress who’s sure she’s going to get fired from every job she lands, only getting comfortable a few weeks in when she’s certain the production no longer has the budget to replace her. “Except for on the Tarantino movie, I never got to be comfortable because they always had the budget to replace me,” she says with a laugh. Though according to Tarantino, Qualley probably could’ve gotten away with relaxing a bit. “I had to lose a lot of wonderful scenes,” he said recently, “but I never cut or trimmed any of Margaret’s. She was the only person that I didn’t edit down.”

Shrugging off the praise in her typical self-deprecating fashion, Qualley at least acknowledges she’s still pinching herself about the opportunities coming her way. “It’s been a weird, circuitous route to be able to accomplish these things that I don’t think I would have been able to had I strictly stuck with ballet,” she says. “All of these opportunities that I’ve had, my childhood self would fucking die.”