After small roles in various (relatively unknown) TV series, she bagged a role in Star Wars: Episode I – The Phantom Menace aged 12 and went from ‘geeky’ grade-A student to Hollywood starlet almost overnight.

Known for playing feisty Elizabeth Swann in the Pirates Of The Caribbean series, Andrew Lincoln ’s object of unrequited affection in Love Actually, and sexy Cecilia with a penchant for bookcases in Atonement, she’s proved she’s no one-trick pony. 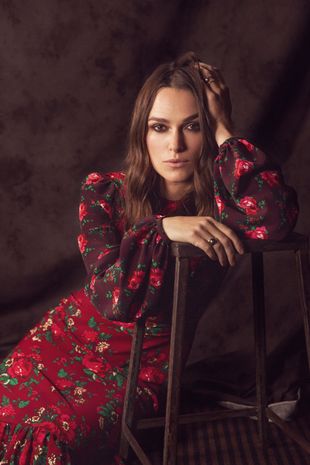 Although, what she doesn’t know about a period drama isn’t worth knowing.

In 2013, Keira married musician James Righton, and in 2015 the couple welcomed daughter Edie.

The family live a down-to-earth life in London, shunning the lights of Hollywood in favour of a nice cup of tea in their local café.

Beautiful, sweary, feminist, self-deprecating and funny, her star is continuing to rise thanks to the success of recent film Colette, and upcoming romantic wartime thriller The Aftermath. 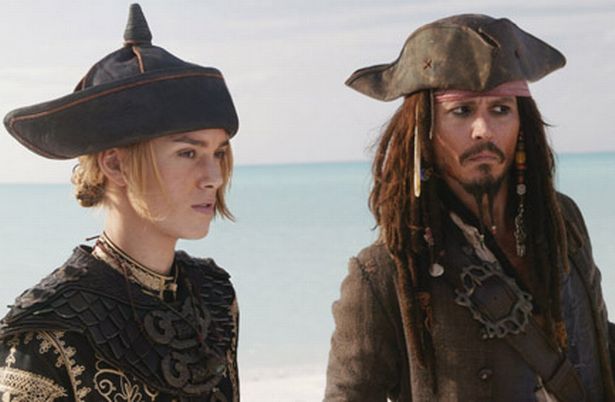 Oh God. Yes, it’s probably over that, because I asked for my first agent when I was three years old. Then got my first small part when I was six in a TV series called Screen One.

It was all quite confusing!

I didn’t know if I was ever meant to be in the film, or if they were just using me because she was 16, so couldn’t legally work in England all the hours they needed her for.

I do look like Natalie and that’s fair enough.

The main thing I remember is falling off the back of a golf cart in front of Ewan McGregor , and only being in a bathrobe, knickers and tights – it was the most embarrassing experience of my entire life.

Which film made you realise that you’d made it?

Probably Bend It Like Beckham. I do remember telling people about it and it was so embarrassing.

‘That sounds awful. What’s it about?’

Everyone thought it was going to be s**t.

But it was huge…

The timing was good. We had David Beckham qualifying England for the World Cup with a free kick, and at the time he’d broken his foot. ‘Mend it like Beckham’ became a huge headline. All of it lined up.

Are you any good at football now?

I played it at school.

When I was nine I organised a protest where we did a sit-in across the pitch because the boys wouldn’t let us play football.

I felt the righteous anger of wanting it. They gave us a girls’ football team.

It definitely led to Pirates Of The Caribbean and Love Actually , because Richard Curtis had seen my tummy and went, ‘Gosh, that’s quite a stomach.’

The whole of the wedding costume for Love Actually was about my stomach. It doesn’t look like that any more, unfortunately!

So, you can thank your abs for a role in a Christmas classic…

It’s the number one thing in America that I’m asked about.

Even more than Pirates Of The Caribbean?

Yeah, and I think there might have been five of those films now.

I remember being very angry at the idea that I had to go for the audition for Pirates Of The Caribbean, because I was never going to get a Hollywood film.

It was so absurd.

And the day I went up for the audition I was late, and I’m one of those people who is perennially early.

So I was in a bad mood. I just thought, ‘Well, this is stupid. I’m now feeling bad and I’m never going to get it.’ I think I was just angry in the audition, and weirdly, it worked.

Did it get to you?

At that age all you want to do is fit in.

But when you’re the girl who’s been taught to be perfect, all you want to do is please everybody.

But I couldn’t be thinner and fatter at the same time.

How did you make sure it didn’t affect you too much?

I think I’ve always had a ‘f*** you!’ attitude, and that’s helpful sometimes.

With Pride & Prejudice, everyone was like, ‘She can’t act and that’s going to be dreadful.’

And you were brilliant in it…

Well, I had been obsessed by the story since I was about 11.

I had a dolls house that was Pemberley.

I almost turned down the part because it was too frightening.

But it’s also one of the first of many times in film I tell people off.

I do that quite well.