She plays Megan, the desirable beauty who seems to have the perfect life in the eyes of Emily Blunt's character Rachel in The Girl On The Train.

And Haley Bennett proved her beauty as she hit the red carpet at the world premiere of the movie adaptation of the bestselling book in London on Tuesday night.

The actress ensured she made an impact on the red carpet as she slipped into an extraordinarily busty gown, in which her chest was rearranged by a hands-on aide. 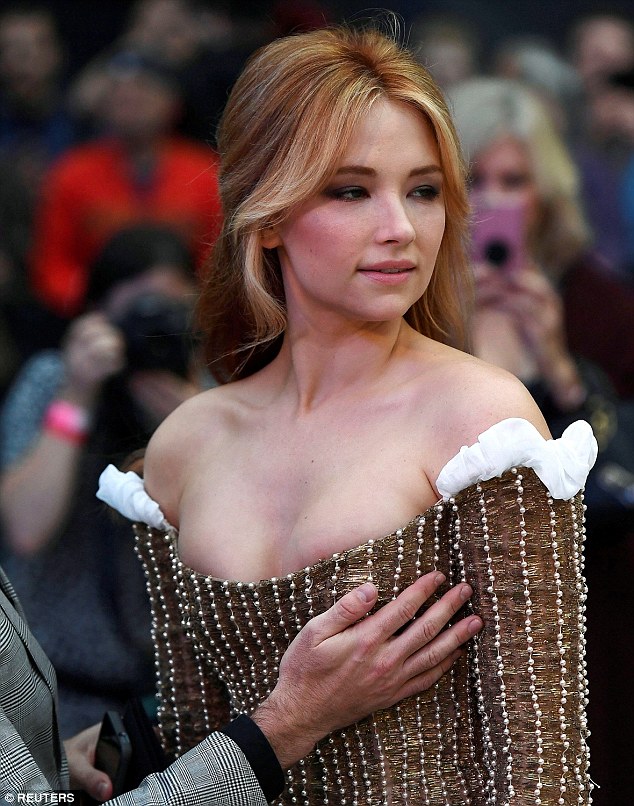 Haley, who is also set to star in the eagerly anticipated movie The Magnificent Seven, was dressed to kill for her stint at the premiere.

Her gown appeared to be borrowed from days gone by with its dramatic Bardot neckline, corseted waist and ruffed shoulders - looking like a Tudor.

The intricate bead work on the dress added to the luxurious feel of the ensemble with the boned structure creating the perfect frame for her figure.

Her dress was barely containing her ample bosom as it was yet a helpful aide was on hand to adjust her cleavage.

Haley's tresses were scraped into an elegant half updo with her waves tumbling around her face in a stunning frame.

She outlined her eyes in a bronze shadow which helped highlight her piercing green stare while her alabaster complexion was drawn out with a hint of blush.

Ensuring all attention was on her bountiful assets, she sported no jewellery to ensure she went for a streamline elegant look.

Haley has scooped the role of Megan Hipwell in the film, which follows from Paula Hawkins' bestselling book of the same name.

The story is told from the point of view of three women: Rachel (Emily Blunt), Anna (Rebecca Ferguson) and Megan.

Megan's character is seen as one half of the perfect couple alongside Luke Evans' character Scott - as seen through the eyes of Rachel who views them from a distance during her commute.

As the story unravels "perfect" Megan becomes embroiled in the centre of a police drama which intertwines the leading ladies' lives like never before.