Historically, pumping breast milk has been something working moms do behind closed doors (or in bathroom stalls, cars, Applebee’s supply closets, or wherever they can, really). Yet as the campaign to #NormalizeBreastfeeding has become increasingly mainstream, a growing number of actors, fashion brands, and influencers have been doing their part to bring more visibility to pumping, albeit in a highly stylized way.

Most recently, actress Rachel McAdams, who just had her first child with boyfriend Jamie Linden, was photographed on the cover of the fashion magazine Girls Girls Girls wearing Versace and dripping in Bulgari diamonds, her jacket open to reveal a breast pump. 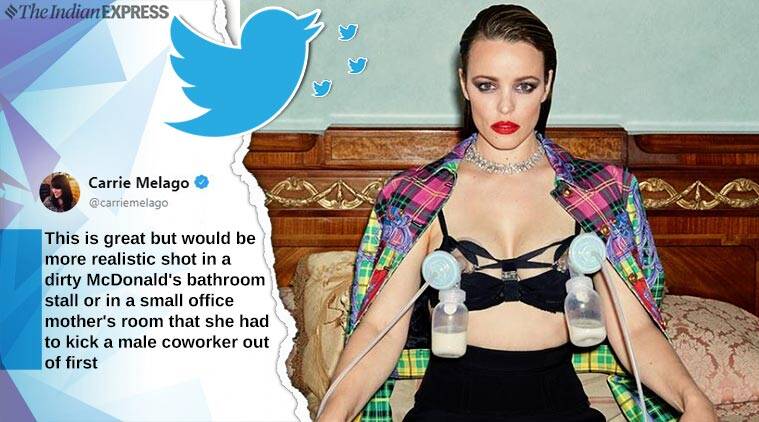 “Between shots she was expressing/pumping as [she was] still breastfeeding,” Rothstein wrote. “We had a mutual appreciation disagreement about whose idea it was to take this picture but I’m still sure it was hers which makes me love her even more. Breastfeeding is the most normal thing in the world and I can’t for the life of me imagine why or how it is ever frowned upon or scared of.” Rothstein then added, “I did not look anywhere near as fabulous as this when feeding/pumping. And that’s ok too.”

Mothers on social media immediately applauded McAdams for normalizing pumping (and looking fly as hell while doing so). “Honestly if I can’t feed my children while wearing heaps of diamonds and designer clothing then i’m not doing it,” one woman wrote, along with the tongue-in-cheek suggestion that the image was proof that women could truly “have it all.”

The breast pump, but make it fashion

The image of a sleek and stylish McAdams strapped to a breast pump is not the first time this year that the fashion world has made an effort to feature pumps. In September 2018, model Valeria Garcia walked the runway at designer Marta Jakubowski’s show while wearing the Elvie Pump, an as-yet-unreleased hands-free pump (though there’s a waitlist, if you want to get on it) that she debuted at the end of the show by dramatically opening her blazer to reveal the pump underneath her bra cups. Like McAdams’s shoot, the goal of the appearance seemed to be “the breast pump, but make it fashion.”

In an October 2018 interview, Garcia said the brand had approached Jakubowski to hire a real-life mom to model the pump. “I’m really pro-breastfeeding. I fed both of my boys. I never did formula or anything,” Garcia boasted in Harper’s Bazaar. “I was really amazed when I saw the product because it’s really quiet and you can really do whatever you want to do while you’re using it. I thought, ‘People will get the message. You can even do runway with the pump.’”

In July 2018, model Mara Martin, a finalist in Sports Illustrated’s swimsuit model search, was photographed on the runway breastfeeding her baby, who wore a diaper, noise-canceling headphones, and bikini bottoms.

While the images of Garcia and Martin got some backlash — mostly from trolls who questioned whether it was “appropriate” for a woman to breastfeed in public — the response was overwhelmingly positive, with many applauding the women for showcasing the reality of being a multitasking working mom.