Alexandra Daddario looked like the picture of casual elegance during a girl's night out on Thursday.

But it wasn't all smooth sailing for the True Detective actress, who endured a small wardrobe malfunction while out with pals.

As the Baywatch star, 32, walked with a couple of girlfriends, the front of her dress whipped up to expose a hearty amount of leg. 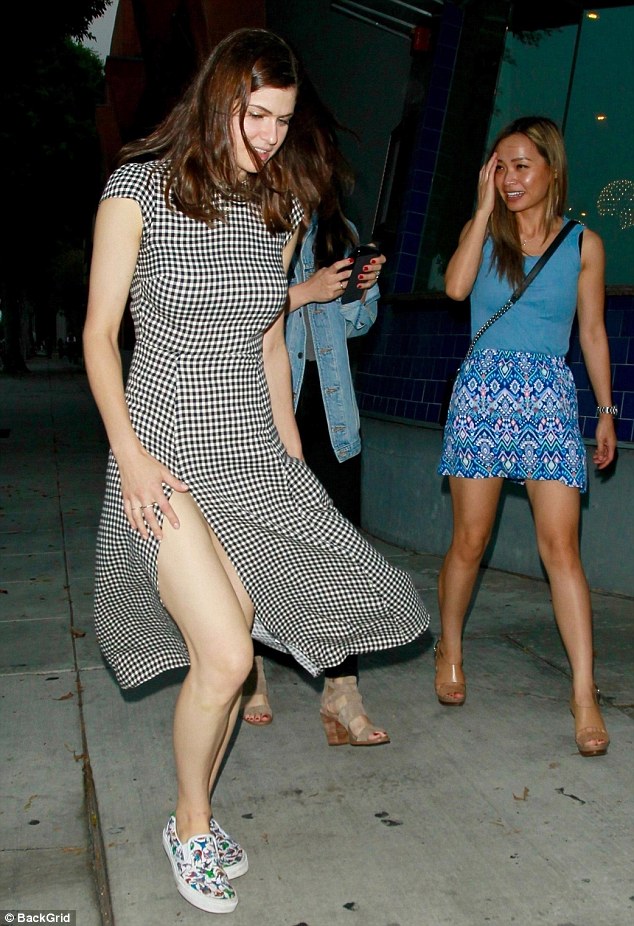 Being the consummate lady, she recovered quickly, clamped down on the front of her dress, and continued with her friends to their car.

She even flashed a big beaming smile.

Despite the fashion snafu, the starlet looked amazing in the black and white checkered dress that hugged her lean and curvy figure in all the right ways.

It had a slit going down the right side that gave it some added flare and sass, but the easy leg access is also part of the reason for the wardrobe malfunction.

She showed a more casual and youthful side by pairing the number with some colorful slip-on sneakers and minimal make-up.

While her trademark brown tresses were worn long and parted ever-so-slightly to the left.

Alexandra was likely spending some time with her friends since her new beau Ari Melber headed back to New York on Tuesday to host his self-titled news and political program on MSNBC.

Just days ago, the two were spotted having lunch together at a Cuban restaurant in Malibu on Sunday.

And at one point, they shared a passionate and romantic kiss inside their car.

Alexandra was most recently linked to Baywatch co-star Zac Effron, but she repeatedly denied any romance and called them 'really good friends.'

She has four new movies that are now in post-production which includes co-headling alongside Taissa Farmiga in the mystery-thriller We Have Always Lived in the Castle; the psychological thriller Nomis that also stars Henry Cavill and Ben Kingsley; I Am Not a Bird, which is a dramatic thriller; and the drama Lost Transmissions which she co-stars with Simon Pegg and Juno Temple.