Talking about Anita is something I have to do. I don’t want who she really was to be forgotten. People think of her in one way – a 60s muse, all that shit – but she was so much more than that. A really talented artist, a great actor, intelligent, funny, thoughtful, fearless… she truly didn’t give a fuck what anybody thought of her. I was desolate when she died. Until she got very ill, we spoke on the phone most days. I don’t want to sound sentimental or sappy, she’s worth more than that. She was so important to me. 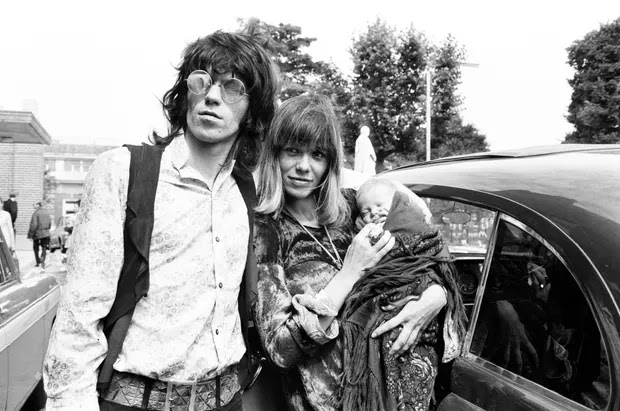 I don’t think we’d ever have become friends if it wasn’t for Mick [Jagger] and Keith [Richards, who became Pallenberg’s boyfriend after she dated another Rolling Stone, Brian Jones]. We weren’t naturally meant for each other, really, but because the boys were so close at the time, and spent so much time in the studio, it threw me and Anita together. We also took a lot of drugs.

We had very different personalities. Anita was really sophisticated and elegant, all that, and she was very good for me on that level, as I was a bit hopeless. She would put me together, tell me what to wear, get me to look right. I’d give her books, and she’d like that. She was four years older than me – I was much more vulnerable than her. When I say she never cared what anyone said, thought or wrote about her, it wasn’t that she talked about it – it was almost if all that stuff didn’t exist. I was always so jealous of her being able to do that.

Anita was really well educated. She spoke five languages, and was a really good artist in her own right. She could have done a lot of other things – to be Keith’s moll was not necessarily her destiny at all. Keith is a very old-fashioned macho guy, who when he’s in love with a woman, wants her to be completely focused on him. I’m not putting that down – it’s just how it is. Anita rebelled a bit, of course. She did Barbarella when he told her not to. She did Performance when he told her not to [laughs] – for obvious reasons! But I have to say that taking drugs does not help your work. Don’t get me wrong, we had some wonderful times – like I remember being with Anita, Mick and Keith, [rock photographer] Michael Cooper, [art dealer] Robert Fraser, going down to Stonehenge and taking lots of acid. That was wonderful. But drugs blocked her, as they did me.

Anita started doing all the things she could have done after stopping the drugs. This was many years later. She did a fashion degree [at Central Saint Martins, London, in the early 1990s]. She started to paint again and did some wonderful watercolours – I’ve got a lot here. She did botanical drawing classes, and she was a wonderful gardener. She liked nothing better than doing the gardens for her kids. And her children [with Keith Richards] are wonderful people – her son, Marlon, his wife, Lucy, and Angela. They were incredibly kind to me after she died, phoning me up, really making sure I felt like part of the family. Children of famous people aren’t always like that, I tell you. They had very difficult times. We all did – Anita could be a difficult woman, and I don’t want to idealise her. But once she got clean, things were so much better.

Her getting ill was terrible bad luck. She got diabetes first of all, and when she was diagnosed, her nose was in the air about it. “I’m going to cure myself with diet!” she said. If only I’d said, “Are you out of your fucking mind, you nitwit!” If you don’t treat diabetes with insulin, it goes to your whole nervous system. She’d get things her body should have been able to ward off. Then she had to give in, of course, and she found it hard to inject. To be clean and have to take a drug was tough for her.

I do wonder how her life would have been different, of course, but come on, she had a wonderful life. I miss calling her up about a lyric, and her always saying something brilliant. I miss her more than I can tell you. Every morning, when I wake up, I read a poem that makes me think about her, Sara Teasdale’s There Will Be Stars. It speaks to me so much about her [reads]: “There will be stars over the place forever, though the house we loved and the street we loved are lost… there will be stars forever, while we sleep.” That’s Anita to me.