Katie Price and Kelly Brook have both been left red-faced in recent weeks as they accidentally flashed their knickers in front of the cameras on the red carpet.

But just how accidental was it? 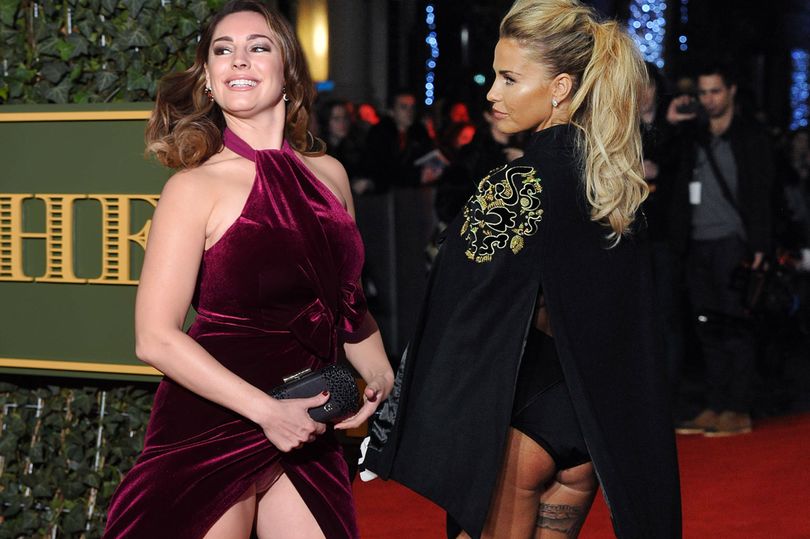 While both stars dealt with the wardrobe malfunctions with the ease of true professionals at the time, it's now claimed they may have planned to flash the flesh - as they channel their former glamour model selves to keep up with younger models following in their footsteps.

According to Closer magazine, both stars - who have had successful careers stripping down to their lingerie and less on mag covers - are attempting to stay at the forefront of people's minds.

Katie left her fans in shock just weeks ago when she flashed her knickers at the Hunger Games premiere.

The star braved all as she showed off her pins in a VERY short black and gold floaty dress - but it was so floaty, she ended up exposing her entire bum and knickers to her fans.

Managing to recover quickly, the star held it down but not before the moment was captured - and as far as wardrobe malfunctions go, it's at the top of the list.

And she was followed closely by Kelly just weeks later as she flashed at the Evening Standard Theatre Awards.

The model and actress , who loves being in the limelight, wore a very daring long velvet red dress for the occasion at London's Old Vic and ended up having a bit of a fashion fail.

As she strode onto the red carpet, a gust of wind blew back her dress, featuring a huge split, and she ended up flashing her pale knickers. Cringe.

Now however sources claim the flashing could simply be a mask to hide their panic at their former glamour model days being close to an end.

A source told Closer mag: "Kelly's friends worry if her cheekily flashing her knickers was pre-planned. In some ways, she misses being in the papers all the time and loves the attention that comes with modelling."

Meanwhile speaking about Pricey, another insider reportedly added: "Katie misses the hysteria that once surrounded her."

They added: "Pals say she's showing off her body again as she knows that unless she gets people talking, she could be overshadowed."

The magazine's therapist Emma Kenny claimed they're "reverting" back to what made them both famous due to "insecurity" in their own talent.