Charli XCX suffered an embarrassing wardrobe malfunction during the ARIA Music Awards on Wednesday - but she managed to successfully laugh it off.

The blunder saw the singer, 29, accidentally expose her entire left breast as the strap of her little black dress slipped away from her shoulder in an outtake. 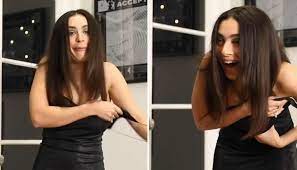 She wore the risqué number while appearing via video call to present The Kid Laroi and Justin Bieber for the Best Pop Release at the Australian awards show.

In the clip, she said: 'And the ARIA goes to The Kid LAROI and Justin Bieber for Stay. Well done, congratulations,' before bursting into a fit of giggles after realising what had happened.

Her followers certainly laughed along with Charli as they rushed to their keyboards to write: 'We need the uncensored version!', 'Thanks for posting this when you really didn’t have to,' and, 'The girlies wanted to congratulate them too.'

Others chimed in with, 'Poor charli', 'Im [sic] dead…..,' as well as, 'Amazing,' followed by a string of laughing emojis.

Elsewhere, Taylor Swift was named the Most Popular International Artist and accepted her award in a pre-recorded video.

In her speech, Taylor thanked her Australian fans for their support and said she can't wait to come back Down Under soon.

This is the most wonderful thing. Thank you so much for voting for me for International Artist of the Year at the ARIAs.

'The fact that it's a fan-voted award means the world to me and you guys are just the greatest. I love you so much. I miss you terribly.'

She added: 'Can't wait until I get to come back and see you and, um, just thanks, guys. This is great.'