Demi Rose cut a low-key figure on Thursday after she was forced to hit back at trolls over her 'embarrassing' runway walk.

The model, 24, attended the LullaBellz pop-up boutique in London for a glamorous hair transformation using hair extensions and wigs. 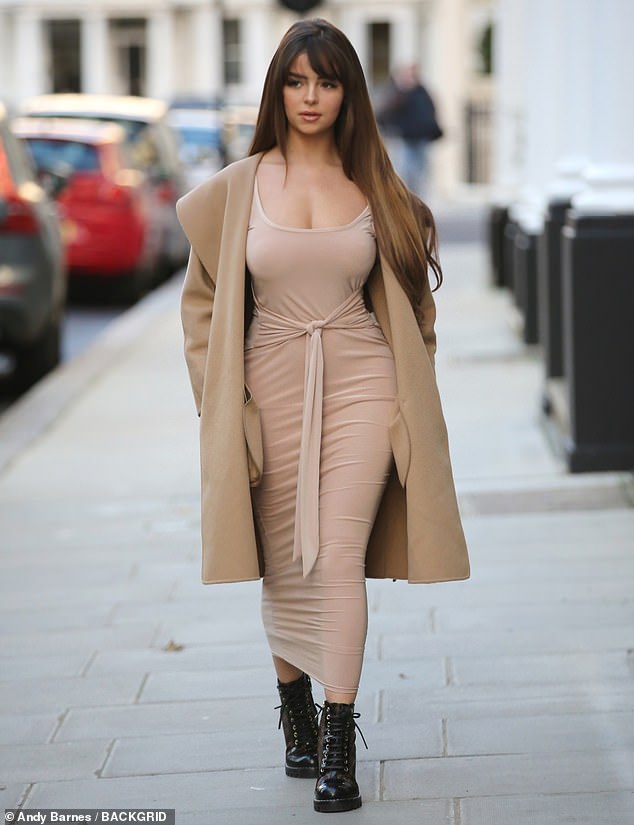 Demi showcased her jaw-dropping curves in a nude bodycon maxi dress, which cinched in at the waist.

She layered the item of clothing with a beige wrap coat and added some glamorous accessories, including a pair of Louis Vuitton heeled ankle boots.

Demi styled her brunette locks and fringe into a sleek blow-dried hairdo, she added a slick of make-up to enhance her pretty features.

The Instagram sensation's appearance comes after she defended herself against trolls who criticised her 'embarrassing' runway walk after a video of her catwalk debut emerged on social media.

Demi took to the catwalk during an Oh Polly swimwear show in July but some Twitter users have since poked fun at Demi's walk online.

However Demi hit back and revealed that she was suffering with personal issues at the time including the death of her mother who passed away the month before.

Taking to Twitter on Thursday, Demi said: 'All jokes aside yes I'm not the best runway model. I was super nervous, didn't want to do it, my top went missing backstage...

'My shoes were too big for me in height and size not to mention I was dealing with personal issues losing my parents, my mom a month before.'

She added that despite her struggles she wanted to make her late parents proud, saying: 'I wanted to push myself out of my comfort zone, make them and myself proud and that takes a lot of bravery.

So for that I'm proud of myself because there's a lot that wouldn't have done it. But it's done now. I can laugh too but I'm still here and it's all Guccccci!.'

Looking back on the experience in a positive light, she said: 'In hindsight it was a really fun experience, showcasing my own collection which I was really proud of.

'I'm really grateful for the opportunities I've got given. Thank you to all those who support me![sic].

In a social media post the devastated star penned: 'Heaven gained an angel today. R.I.P Mommy', with a heartbroken Emoji.

Demi shared supportive posts from her friends before also posting an image of two birds while adding the caption: 'Saw these two love birds on set today. I hoped they were Mom & Dad paying a visit.'

In October, she was left distraught after revealing her beloved father Barrie has died aged 80.