Elizabeth Olsen has been appearing in films since she was about four years old, but her acting career began in earnest with the 2011 film “Martha Marcy May Marlene.” Now she’s trying her hand at the small screen with “Sorry for Your Loss,” a which she not only stars in but also executive produces.

“Long-form has always been interesting to me because all of the different turns a character can take and change and evolve over time,” Olsen tells Variety. “And with Kit [Steinkellner]’s pilot, I just found not only the character could be someone that I immediately felt a connection to — it made me laugh, it made me cry — and it was at a time in my life where I was in a transition.” 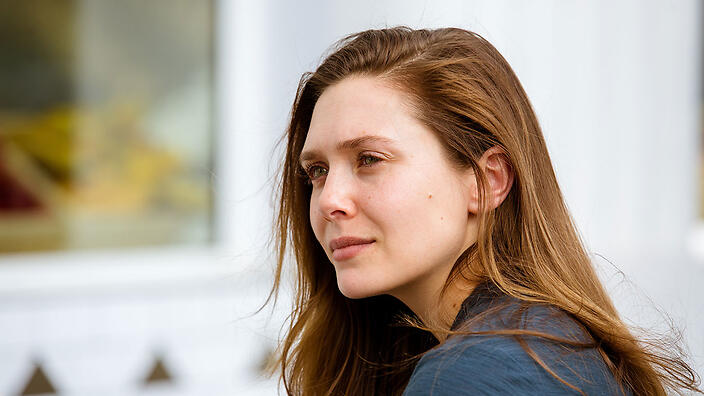 The show, which will launch the first four episodes at once on Facebook Watch Sept. 18, centers on Olsen’s character Leigh, a recent widow, as she struggles to get through the days without her husband and, to some degree, reassess their relationship since it came to a premature end.

“There are so many stories about love, but the stories about death all feel so sappy to me or melodramatic,” Olsen says, “and I just feel like this handled grief in a palatable way where it can actually be a part of a conversation and be an interesting character study of someone going through an extreme trauma for the first time.”

“Sorry for Your Loss” came to her three years ago from Robin Schwartz at Big Beach, who specifically asked if she wanted to attach herself, package it, and help develop it. Olsen had never put her name on a project as a producer before, but she was interested in the collaboration, from casting to editing.

“My favorite part about filming anything is being a part of a crew,” she says. “It makes me feel so satisfied every day and go to work and get your hands dirty and be creative with these people. And it made me feel so responsible for them.”

But that additional responsibility also presented new challenges, and an adjustment from her film work.

Among the lessons was how to calibrate her performance over 10 episodes versus a two-hour feature. “As an actor there are certain rules that people use, which is like, ‘cry once or it’s not impactful,'” she says. “And there are certain things you try and withhold as much as possible, until you can’t anymore. But I don’t even know how to follow those rules with TV because you don’t have [that].”

So she relied on an open dialogue with the rest of the creative team to find Leigh’s journey. “It was kind of a constant question I would ask Kit: ‘Where do you think she is now?'” she says.

When “Sorry for Your Loss” starts, Olsen says, Leigh is in a “consistent numbness — and if she’s not numb, there’s something that’s creating anger.” But she will get to show other sides to the character, particularly through flashbacks to before her husband’s death. “The fun thing about the flashbacks is since we’re dealing with memory we don’t have to deal with continuity,” she says. “There is a freedom in that, and there is a lightness in that.”

And as episodes unfold, there will be present-day shifts that also allow for some more hopefulness.

“The thing that we always thought about with this show was if you’re going to make a story about loss and grief and death, then you’re ultimately going to tell a story about how lucky and amazing it is to be alive,” Olsen says. “That is a sentence that we have wanted to be a theme in this show, so it is really important that there’s hope. We do lose people, and we do have to figure out how to go on without them. That’s the thing with Leigh — she can’t fathom how she’s going to move forward, but she can’t go any other way; there’s no other option so she has to figure it out. It’s just about dealing with the unknown and making peace with it.”