While everyone was wondering which stars would thumb their noses — or flash their boobs — at CBS’ Grammys dress code this weekend, Marion Cotillard had a clothes call at the BAFTA Awards in London. 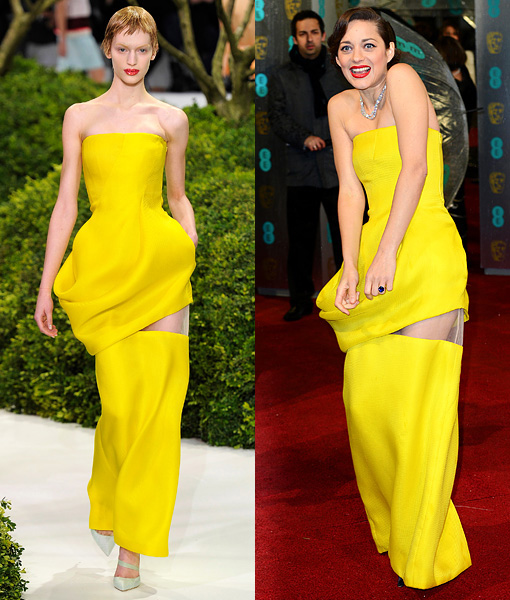 As the Rust and Bone star walked the rainy red carpet at London’s Royal Opera House, her bright yellow Christian Dior dress appeared to be coming apart at the seams.

Cotillard “almost managed to reveal her derriere,” announced UK’s Daily News, showing photos of the star from every possible angle. But while the actress’ floor-length dress did offer a clear view of her upper thighs, there’s just one problem with this wardrobe malfunction story…

That’s how the dress is supposed to look.

The deconstructed column — two layers joined together by a sheer side panel — looked exactly the same on Cotillard as it did on the runway at Dior’s Spring/Summer Couture 2013 show in Paris.

The design of this and a few of the other pieces presented by Dior creative director Raf Simons — who listed Audrey Hepburn, Janet Leigh in Psycho and any woman “who dares to be different” among his muses for the collection — are certainly fashion forward, but that doesn’t mean they’re not expertly constructed. An haute couture dress is the product of hundreds of hours of work by a team of skilled seamstresses, and often comes with a 5-figure price tag.

Last month, several fashion blogs mistakenly reported that Jennifer Lawrence had ripped her Dior gown as she stood to accept the award for Best Actress at the 2013 SAG Awards. “The dress is made with different levels of tulle and satin and that is what the viewers saw when Jennifer lifted her dress slightly,” a rep from Dior told EW. “It was not ripped and there was no malfunction… it was the design of the gown.”