Natalie Portman awkwardly called out the Golden Globes for snubbing female directors from one particular award.

As she took to the stage with Ron Howard to present the award for Best Director in a Motion Picture, Natalie pointed out that not one female was nominated for the prize. 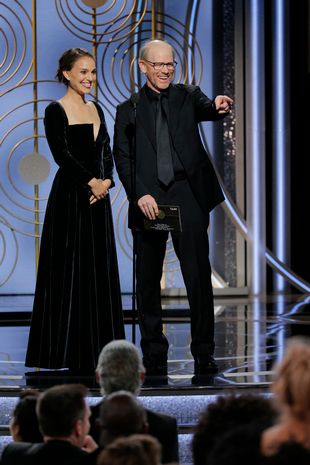 The award went to Guillermo Del Toro for The Shape of Water, while nods were also handed to Martin McDonagh (Three Billboards Outside Ebbing, Missouri), Christopher Nolan (Dunkirk), Ridley Scott (All the Money in the World), and Steven Spielberg (The Post).

After Ron said it was an honour to be there to present the award, Natalie sheepishly leaned into the microphone and said: "And here are the all-male nominees."

Ron laughed and as the shot cut to Guillermo, he was looking around the crowd.

It's been a night filled with female empowerment, beginning with the blackout on the red carpet, where all but a handful of women dressed in black for the awards in protest of industry-wide sexual harassment.

It was a way for the women to send a strong message to Hollywood - Time's Up.

And many women who took to the stage to present or collect awards gave powerful speeches on the subject.

Host Seth Meyers also had his say on the matter, launching into a scathing attack on Harvey Weinstein as soon as he took to the stage - even joking about the disgraced producer's death.

The late night host tackled the Hollywood sex abuse scandal head-on in the very first line of his opening monologue.

He added: "It's 2018 and marijuana is finally allowed in California and sexual harassment finally isn't, it's going to be a good year."

"There is a new era underway," he went on. "It's been years since a white man was this nervous in Hollywood."

He continued: "Harvey Weinstein isn't here tonight because I've heard rumours he's crazy and difficult to work with, but don't worry, he will be back in 20 years when he becomes the first person booed during the In Memoriam."

Multiple allegations against actors, filmmakers and Hollywood agents since October 2017 have led to many of the accused being fired, forced to step down, or dropped from creative projects.

Some of the A-list stars attending the Globes ceremony have given their own harrowing accounts.